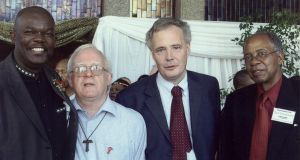 Steve Biko, founder of the Black Consciousness Movement in South Africa, once wrote “Being black is not a matter of pigmentation – being black is a reflection of a mental attitude.”

Although I’m originally Irish, while working in the black townships in South Africa I was told by community leaders I was a white African. I wondered was this an identity change. A migrant experience of African hospitality, or more, of acceptance? So who am I now? Perhaps I’m a priest and diaspora-fluid Irish-African!

Even if I never called it so, I too, experienced minor discrimination as a white person in South Africa during apartheid, though nothing, sadly, like Irish people of colour have in Ireland. I was thrown out of Johannesburg railway station because I was with black friends in a “Blacks Only” area, and, with a fellow friar, removed from a train because we were in a “Blacks Only” carriage.

And this had to be the most surreal. A right-wing Republican lobbyist in Washington, financed by the old South African military intelligence, publicly accused me and other clergy of distributing guns to kill white people in Johannesburg in the eighties.

I, with others, was also arrested by the South African police, tried and convicted of illegal protest occupation of state buildings and “criminally” living in no-go African areas for 20 years in defiance of apartheid laws. My charge sheet, drawn up by a black officer, has, to this day, Charlie Haughey as my ethnic tribal chief!

It was a time when police plotted to silence priests of the Irish diaspora in words reminiscent of the 1916 Rising: “We will make those buggers pay for it” (General Maxwell to a priest coming to assist Pádraig Pearse).

Living in South Africa through the eighties and “trapped” in the final uprisings that brought down apartheid shocked me into recording secretly what I was witnessing and experiencing. To try to explain it – think of being a participant-witness in the Rising or the Irish War of Independence.

My book They’re Burning the Churches (Jacana Media Ltd), tries to capture that time. It’s an eye-witness account of the final 10 years of the liberation struggle and includes the major trials that made world news at the time. South African national radio have serialised it twice, calling it the best record of the time.

My second book, Township God (Write-On Publishing) is my journey into the underbelly of urban Africa and invites you, the reader, to join me and be ready for surprises.

It ranges as far as the Middle East, and offers an unusual window on modern Ireland. How much did we know about the South African arms sales to loyalists in the North between 1982 and 1988, something British forces were aware of?

There are lighter moments too, detailing what the Irish media didn’t pick up when President Mary Robinson was guest at a reception for the Irish community in downtown Johannesburg in 1996 and when Ireland played the Springboks in Pretoria, a game avidly attended in 1998 by former apartheid generals, .

Remember the glory days of Jack Charlton’s Italia 90? Twenty years later I was part of preparations for the 2010 Soccer World Cup in South Africa, the Cradle of Humankind, and the hated (by the Irish) Vuvuzela horn!

I was asked to lead an ecumenical service to pray for the soccer World Cup to be awarded to South Africa! Morocco and Egypt were praying to Allah with the same passion. My god listened. The World Cup came to South Africa. Now I’m waiting for a call from the FAI to do the same for Ireland!

Racism. Among four million white South Africans in the seventies were 30,000 Irish and thousands from other European countries. Add to this melting pot thousands of former Rhodesians, and Portuguese from former colonies like Angola and Mozambique who were welcomed by the apartheid regime and were promptly programmed, rebooted, reset, and downloaded as apartheid fashioned men and women.

Then in the eighties the monolith that was apartheid began to crack and splinter in the area I was ministering in, heralding the end days of the evil system.

Apartheid falls. The big question is…..now what? Suppose you can’t cope with the political changes, the reversed order of things, the new black government? Like thousands of white South Africans you headed for Australia, United Kingdom, Ireland, New Zealand and Canada.

But unlike the British, most of whom left Ireland after the War of Independence, many South Africans of European background stayed, hoping for the best.

But again, the question was, what next? How do you build social cohesion if not reconciliation between all these wounded people? Why care even? The mainline churches who had shepherded the end of apartheid were concerned. As an “Irish-African” I decided to contribute what I knew best. Living and working for 40-odd years in the tin-shack townships of South Africa has given me insider’s intuition, frontline experience, traumatised memories and some fire in the gut. Eventually, I came to realise racism itself, for the most part, is nourished in the very core of society, the family.

I wrote Help! My Granny’s Dog is a Racist! (Write-On Publishing) from the coalface of racism itself, in an attempt to unpack the options.

As I said intolerance so often breeds in the family. It’s here we need to interrogate our attitudes and behaviour, to challenge memories that linger from past conditioning, acknowledging that many thousands of Irish people fought for colonial powers and came home with “racist” stories of “heroic conquests and massacres.”

Finally, I wrote a book called St Francis Uncensored (Choice Publishing), which is a controversial take on the saint and deals with, among other things, inter-cultural chaos in the early church in Jerusalem after the death of Christ when Greeks, Romans and Jews wanted to become Christians and because St Francis of Assisi in his day was a “loose cannon” mediator between Islam and Christianity.