A novel about weight, an exhibition about famine

Ethel Rohan, back home to launch her debut novel, The Weight of Him, visited a Famine exhibition to punish herself but left inspired 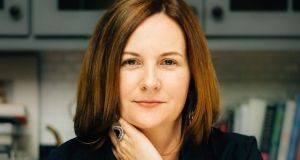 Ethel Rohan: Since my flying return to Ireland, I’ve revelled and rejoiced much too much for my punisher’s liking

I recently visited the newly-installed Irish Potato Famine exhibition in the St Stephen’s Green Centre, Dublin. The tour raised studs on my skin and felt especially disconcerting because my mind has been so full of various things fat over the past decade – 10 years spent writing my first novel about a man who is almost 30 stone and his startling quest to better the world.

I’m not quite sure what pulled me through those wide glass doors and into the exhibition during my brief return from San Francisco to Ireland and amidst a dizzying week of writers’ festivals, book signings, TV and radio interviews, and my novel’s launch party. Work, a nap, or a glass of champagne with family and friends would have been much more fitting, but something drew me to the exhibition as if I were hooked and reeled.

Maybe I visited the exhibition because I love history, and in particular Irish history. Maybe it was the haunting photograph of the bare-chested man in the promotional posters and the need it struck in me to know his story. Mostly, though, I suspect it was my punisher who lured me inside the exhibition, that internal voice that says I can’t have it all, that says I don’t deserve, that says I haven’t suffered enough. Since my flying return to Ireland, I’ve revelled and rejoiced much too much for my punisher’s liking. It was beyond time for it to kill off my delight and return me to the shadows. So in it sent me to the exhibition to dwell with tragedy and tumble from my high.

The exhibition chronicles the Irish Potato Famine (1845-52) through a short, harrowing film and tens of fascinating if chilling photographs accompanied by informative display panels. Throughout, I balked at humankind’s capacity for barbarism. Much more could have been done to alleviate the Irish Potato Famine – a catastrophe that claimed the lives of one million men, women and children to starvation and related diseases, and another million to emigration – but prejudice, greed and politics compounded the staggering devastation.

I also marvelled at our capacity for heroism and benevolence and especially appreciated how the exhibition honoured the invaluable work of women and women’s societies during the famine and its long-felt aftermaths – groups that provided food and clothes, created employment through cottage industries, and founded and maintained food kitchens. More than anything, though, I toured the exhibition filled with wonder at our capacity to survive. An entire nation ravaged by systemic bigotry, poverty, unemployment, disease and starvation, and still the Irish people persisted.

When I exited the exhibition, the lover of history in me felt satisfied. To know and remember our ancestors is to honour and memorialise them, and to hopefully learn from them. My curiosity about the story of the bare-chested man in the promotional photograph wasn’t similarly sated. His identity and specific circumstances are unknown and it’s only in our imagination that we can bring him to light. There’s at least consolation in that. Most remarkable, I walked away from the exhibition having thwarted my punisher. It hadn’t succeeded in making me feel the all too familiar press of guilt and anxiety. It hadn’t stolen my sense of accomplishment and contentment.

The punisher has been with me since my earliest memories. It’s a tormentor that insists I’m not good enough, that I’m not able, and that I should stay small. It makes me believe that for every good thing that happens, I’ll be made to pay a price, and the more I gain, the more that will be taken away. For decades, my punisher has sliced at me. Always, though, some defiant and resilient part fights back and rises up. A part that has always dreamed and always wanted more – despite how much the punisher filled me with doubt and fear and self-loathing.

In the days since the exhibition, I’m amazed by how positive and powerful I still feel. I seem free at last of the punisher. I’ve felt its grips loosening over the years, and in particular in recent months, but now it appears to be entirely gone. It’s as if something inside the exhibition somehow finished it off. There, I’d visited with ghosts and paid homage to the past. I’d stared down the worst in us and bowed down to the best. I’d felt astonished at what we can survive and the heights to which we can climb. Throughout, as I moved from photograph to photograph and sat in the small dark of the film room, the hammer of my heart urged me to rejoice in being alive and in my successes, and to believe that I can be all that I dare to be.

I regret not asking the exhibition’s curator why he named his installation the Irish Potato Famine as opposed to the more typical term, the Great Famine. I suspect he believes “great” hardly applies. Always, my punisher has taunted me with put-downs, insisting that “great” can’t ever apply to me or my life, either. Now, I can finally believe what that valiant, hungry part in me has always known – my punisher is wrong.
Ethel Rohan’s debut novel, The Weight of Him, is out now from Atlantic Books.
The Irish Potato Famine exhibition runs until September 30th