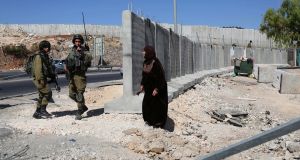 The occupation of where, you might ask, faced with this euphemistic subtitle – though there’s a clue certainly in the cover illustration of a high concrete wall in a Middle Eastern landscape. But you have to turn to the back of the book to know for sure that it refers to the “Israeli occupation of the West Bank and Gaza”. Of course euphemisms have surrounded the distressful Palestinian “problem” since its beginnings nearly 70 years ago and do still even with editors as well-meaning and engaged as Chabon and Waldman.

Is “occupation” even the appropriate word? It’s a question answered by the Palestinian Fida Jiryis, in one of the most stringent statements assembled in this collection of impassioned pieces by 26 distinguished international writers from Mario Vargas Llosa to Anita Desai to Colm Toibín and Colm McCann. An occupation, Jiryis points out, is a temporary state of affairs; while the continuing appropriation by Israeli settlers of Palestinian land and property has blatant intentions of permanence. It is in reality “a systematic dispossession”.

The realities of this dispossession and what it means and has meant for Palestinians year in and year out and day in and day out is what these writers graphically describe. Invited by Breaking The Silence, the organisation of Israeli ex-soldiers who found they could no longer support what they came to see as injustice, to visit Palestine-Israel and write about what they saw and the people they met, the writers’ indignation and even horror is often palpable.

“The feeling is really bad,” says Dave Eggers, quoting the man who takes him around Gaza. “That you can’t leave. That no one can come here.” The incarceration is methodical.

Some of them start with their arrival at the airport in Tel Aviv, a vibrant city humming with culture and money, and the necessity to hide from security the purpose of their visit, before the hour’s drive that will take them to a military checkpoint, and into a country that they variously describe as a prison, a cage, or a ghetto.

“The feeling is really bad,” says Dave Eggers, quoting the man who takes him around Gaza. “That you can’t leave. That no one can come here.” The incarceration is methodical. The single military-controlled entry and exit points. The long lines of workers who queue up at dawn at at one of those exit points in the shadow of the 28ft wall, hoping their papers are enough today to get them through the whimsically Kafkaesque security requirements, and onto the bus that will bring them to some menial and hard-won job in Tel Aviv. Cheap labour is as necessary to Tel Aviv as it is to any other city and the Palestinians provide it.

A worker could drive to work, he or she might have a car. But the car has white number plates and so can only be driven on “must-use roads” that lead nowhere. Israeli-owned cars have yellow number-plates and can be driven on the sleek highways that take them everywhere. Yellow plates – a choice of colour that seems a triumphant if understandable reference to the yellow star imposed on Jews by the Nazis in the 1930’s. If the creation of Israel was an attempt to invert history, so it goes on.

The worker may have had no coffee this morning because he had no water to make it with. The issue of the lack of water appears often in these accounts. A Palestinian’s water ration is one seventh or eighth that of an Israeli. A third of the family income may go on water. The scarcity is due not to drought but to the expropriation of aquifers and ancient water cisterns by the settlers who encroach steadily eastwards, necessary to feed the sprinklers and dish-washers and Jacuzzis inside their red-roofed properties.

The onward march of those Mediterranean style roofs is another motif. Palestinian houses have flat roofs with rain-catching tanks on them. The people who live in the red-roofed houses are often new arrivals from Brooklyn or Philadelphia, migrants willing to be used to extend Israeli rule ever further into Palestinian territory for the benefit of affordable houses as much as for political reasons. Housing is expensive in Tel Aviv. When settlers take over the house or land of an Arab shepherd or olive grower, armed protection has to accompany them, turning a few more historically pastoral fields into, from the Israeli perspective, a new satisfactorily militarised zone.

“The settlement has no border” quotes the Canadian writer Madeleine Thien. “Each year it is larger than before.” The result is the manufacture of an increasingly fragmented Palestine. One town separated from the next, one city from another; an Arab family marooned in a makeshift tent within a mushrooming Israeli enclave, forbidden to cross this road or graze their goats on their own hill that the animals grazed on a week before.

Thien describes the fragmentation as the rendering of a river into pools. Vargas Llosa compares it to a Gruyère cheese. In Jericho, the mythical city he yearned to see, Toibín vividly evokes the sad and deprived pool it’s become. Of course, as Vargas Llosa points out, the settlers too are in prison. But at least it’s a prison of their own making.

In the desolate rat-trap alleys of Hebron that she ably describes, Eimear McBride looks up at the sky and sees literally rubbish. “Filth. Bags of shit. Bottles and nappies . . . Thrown down on people from the bright white settlements built above, on top of them, in buildings that were once their own . . .” She is charged by the indecency of it, the disgrace. In a book filled with indignation, her account is one of the most incandescent.

The American novelist and journalist Lorraine Adams quotes a young Palestinian woman – “We just don’t have as good a story as they do. What’s better than the Holocaust?”

He to whom evil is done will do evil in return . . . Is this enough to explain the contempt and cruelty wreaked on one nation by the other? Beyond the pragmatic claims of the powerful nation to safety and perhaps its very survival, is vengefulness also a factor? Historically, Israel has the conscience of the world on its side. The American novelist and journalist Lorraine Adams quotes a young Palestinian woman – “We just don’t have as good a story as they do. What’s better than the Holocaust?”

So there’s a bitter irony in McBride’s comment on the obliterated street names of Hebron. It’s an effort, she says, “to make history die”. And the world turns away as if two wrongs can make a right.