LeAnne Howe, Doireann Ní Ghríofa and Padraig Kirwan on their collaborations inspired by a remarkable act of empathy 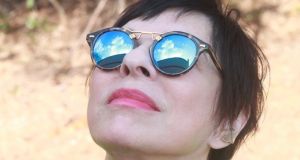 LeAnne Howe: We lost one quarter of our population from starvation on that long walk to Indian Territory. But I believe it gave us empathy for others who have suffered great loss and hunger

As a Choctaw, it was my mother, the late Christine Billy (Poynor) who told me about our tribe’s 1847 gift to the Irish during the potato famine. I’m not sure what year it was when she told me, or even how old I was at the time. But she was very proud that the Choctaws had taken up a collection at Skullyville, a town in Indian Territory, and sent it to the Irish for famine relief.

I remember how the news affected me. I wanted to know more about our tribal history and about our mound building culture. When I decided to write a novel many years later I applied for and received several research fellowships while working on Shell Shaker (Aunt Lute Books, 2001). Much of that book slides between 18th- and 20th-century histories and in one chapter my character talks about the story of the Choctaws giving aid to the Irish people in 1847, only 16 years after our own tragic removal from our original homelands. We lost one quarter of our population from starvation on that long walk to Indian Territory. But I believe it gave us empathy for others who have suffered great loss and hunger.

Enter my association with Goldsmiths University Senior Lecturer in the Literature of the Americas, Irish scholar and author Padraig Kirwan, He asked if I could come to London and give a reading from Shell Shaker in 2011. I was greatly honoured. Now we’re working on a book together, Trans-Atlantic Reciprocity: The Choctaw-Irish Gift Exchange 1847-2017. These essays by Choctaw and Irish writers look at the original gift that the Choctaw sent and the Irish response.

Padraig Kirwan writes, “I seem to remember hearing about the gift when I was still at primary school in Rathdrum, Co Wicklow, and the very idea of it seemed epic, almost folkloric, to me then. When I began to investigate the circumstances surrounding this truly amazing act of generosity, I realised that the real story was, in fact, more impressive and awe-inspiring than I had first thought. Removed from their ancestral lands by state and governmental policies that supported and enabled white settlers’ land claims in Georgia and Mississippi, and further encroachments into land west of the Mississippi River, the tribe had suffered great losses in the early decades of the nineteenth century. Those hardships, and all that the Nation had lost, make the decision to donate money to Ireland remarkable.

“We must honour that spirit of empathy today, and remember that Chief Batton’s decision to visit Ireland, President Higgins’ wonderful welcome for the delegation and Alex Pentek’s inspiring sculpture Kindred Spirits are parts of a long history of international collectivism and connectivity between the Choctaw Nation and our own. Beyond our nations, I would hope that the book project that we are working on has the potential to force us to think about empathy and dialogue between culturally distinct communities, while also reminding us of the importance of sharing resources. Today, more than ever, we need to hear about that.”

This year, I learned about the wonderful monuments that were being created in Ireland dedicated to the 1847 gift exchange. That’s when I saw the posts by the amazing Irish poet Doireann Ní Ghríofa. She and I decided to create a chapbook Singing, Still, Libretto for the 1847 Choctaw Gift to the Irish for Famine Relief of “call and response” poems dedicated to our ancestors, the Irish and Choctaws who lived and died through the hunger years, suffering at the hands of colonialism. As Doireann reminds us, the poetry is trilingual, allowing English to form a bridge between our native languages.

“I was exhilarated to be approached by LeAnne Howe, a poet whose work I have admired for some time,” says Doireann Ní Ghríofa. “The process of researching and beginning to write this pamphlet ignited many feelings for me, notably a deep gratitude, but equally, a deep and profound sense of shame. We Irish have such common ground with the Choctaw people, sharing our histories of brutal colonialism, and yet so many people of Irish origin were active in the subjugation of native communities across America – not least Andrew Jackson himself.

“This pamphlet allowed me a way to articulate both gratitude and shame. For months I immersed myself in the process of responding to this extraordinary act of gratitude. It is such a pleasure, now, to see our collaboration in print, and a worthy gesture, I hope, to our ancestors – both those who hungered and those who nourished.”

We did. Here too, is our call and response.

To order a copy of Singing, Still, Libretto for the 1847 Choctaw Gift to the Irish for Famine Relief, visit ileannehowe.com and click publications. LeAnne Howe is Eidson Distinguished Professor in American Literature at the University of Georgia

In the beginning, some say the Choctaw people came up out of the mound at Nanih Waiya singing

Because you are holding onto me I am not dead yet.

Listen.
Can you hear it?

From the land, a voice lifts.
It becomes a chorus.

Because you are holding onto me, I am not dead yet.
As long as you speak of us, you will not forget.

Right here my body was a cycle of giving until
Torn from our homelands by the Naholla, and
Andrew Jackson, the duteous seamster
Intent on opening all veins.

Right here I will stitch my wounds and live on
And sing,
And sing,
I am singing, still.

The past can be seen only
through a keyhole we peer through,
to find this narrow, shadowed view
of those who wait there,
a murmuring heard
from the other side
of the door.

And so, I press an ear
to the keyhole.
I press lips to it.
I call again;
in gratitude,
I call to them.

I know they are there,
I can almost hear them speak
as they prepare to leave.