Books of the month for children: A boy refugee and the experience of change

Sara Keating picks her favourites for children and young adults 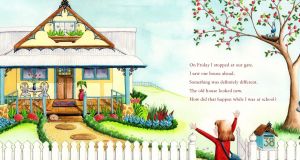 Nicola Davies is best known for her books about the natural world. A zoologist by training, she has created accessible biology-themed tomes for toddlers, early and confident readers, tackling subjects as diverse as microbes, nature’s monsters, and poo. Less well-known are her fictional picture-books, which often feature animals in their natural habitats, although King of the Sky (Walker Books, £12.99, 4+), Davies’ second collaboration with illustrator Laura Carlin, has a humanitarian rather than an ecological message.

Endorsed by Amnesty International, King of the Sky tells the story of a young refugee who finds himself drawn to an old man who keeps racing pigeons. As the pair track the birds’ journey across Europe, the boy finds a way to make sense of his own situation, gently revealing the idea of home as a site of self-invention.

Carlin uses smudged pencil and charcoal sketches on the first few pages to suggest the boy’s outsider status. However, the grim world behind the weeping window-pane slowly sharpens as the boy forges connections with the old man and his favourite bird. The King of the Sky works well as both a stand-alone story and a starting point for discussing important political issues of migration. The theme also ties in nicely with another new release from Davies, Lots: The Diversity of Life on Earth (Walker, £12.99, 4+), which explores the magnificence of life on our planet – from the tops of trees to the bottom of the seas – aided by the glorious detail of Emily Sutton’s illustrations.

Through the Gate by Sally Fawcett (EK Books, £9.99, 3+) also echoes the themes of King of the Sky, in a story that any young child who has experienced change will be able to relate to. A little girl’s life is turned upside down when her family move house: “new town, new school . . . nothing was the same”. On her journeys to and from school, the girl’s environment slowly becomes familiar, and Fawcett creates a visual journey for the reader as her illustrations gradually shed their grey hue and become suffused with colour. By the end of the book, the girl’s house is a welcome sight and her new garden is in full bloom. The site of her fear is now her home.

Dozy Bear and the Secret of Food (Faber and Faber, £6.99, 2+) will give parents plenty of ideas for dealing with picky eaters. Written by Katie Blackburn, it follows the adventures of fussy foodie Dozy Bear, who sets off into the forest looking for something to eat after refusing the family feast. “I Only want fish”, he insists stubbornly. While mum and dad take a postprandial nap, he wanders into the woods where he meets an apple-eating hedgehog, a blueberry-snuffling owl, and a carrot-crunching rabbit.

With a little bit of peer support, Dozy Bear finds himself turning into quite the omnivorous eater. Richard Smythe’s illustrations feature fabulous cut-out collage pictures and the animal characters, with their quizzical expressions and rolling eyes, are particularly appealing. Blackburn’s text, meanwhile – which includes a singsong rhyme with real-world benefits – makes Dozy Bear and the Secret of Food a valuable resource for the frustrated caregiver of a fussy eater, as well as a great story.

Adult art-lovers will relish the opportunity to steal a glance at Leonora Carrington’s The Milk of Dreams (New York Review Children’s Collection, £11.99, 5+), a surreal collection of symbolic stories and eccentric characters, like John, who has a pair of wings for ears that take flight one day long with his head, or Jeremy, who feeds his couch until it outgrows him. Most of the illustrations take the form of pencil sketches and crude watercolours, and although they are not a match for Carrington’s most sophisticated work as a professional painter, the pluralistic physical forms of her bestial human characters showcase the range of her strange and wonderful imagination.

The simple language, odd humour and non-sequential plots have an Edward Lear-like charm and an Edward Gorey-like Gothic sensibility. They could also prove inspirational for young storytellers finding their voice: art does not need to make formal, logical sense.

Nothing makes sense to 12-year-old Olive anymore, the protagonist of Emma Carroll’s gripping historical drama, Letters from the Lighthouse (Faber and Faber, £6.99, 10+). Her father is missing, presumed dead, in action, while her grieving mother is walking around like a ghost. When her 17-year-old sister, Sukie, disappears during an air-raid one night, Olive and her brother Cliff are evacuated to the Devonshire coast, where a begrudging lighthouse-keeper takes them in. The pair find themselves charged with delivering the village post, and the imaginative Olive casts herself as a valuable spy. However, when she intercepts a coded message that involves Sukie, her appetite for mystery becomes increasingly urgent.

Olive is an engaging, clever protagonist, unflinchingly loyal and determined to “make do and mend”, in the spirit of the time. Part-detective story, part-historical portrait, Letters from the Lighthouse will appeal to readers of all dispositions, as Carroll ensures the historical elements never overwhelm the story, which is as accessible as anything set in modern times. That said, Letters From the Lighthouse will also sit nicely with other classic second World War tales, like Nina Bawden’s Carrie’s War and, more recently, Shirley Hughes’s Whistling in the Dark.