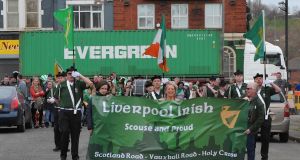 President Michael D Higgins has in the past acknowledged the huge contribution of Irish emigrants in Britain to keeping the country solvent. Between 1940 and 1970 the equivalent of more than €5 billion was remitted to Ireland from workers in the UK.

The inability of the Irish State to provide a living for many of its citizens in the postwar period meant that tens of thousands of young men and women left the country from the 1940s through to the 1970s. My father, from Wicklow, was one of those young people. He arrived in Garston, in Liverpool, in the late 1940s, as did many others.

One narrative strand of my new novel, Under the Bridge, follows the path of two such immigrants, from the 1950s through to the 2000s. Although not biographical, the novel is the story of families like mine, the city we came to and the country we left.

The later decades of this period saw the poutbreak of violence in the North of Ireland, IRA attacks in Britain and the introduction of the Prevention of Terrorism Act in 1974. For a period, the only time the Irish were talked about was connected to violence, or to be laughed at by the Saturday night comedians. In 2012 British prime minister Theresa May shamefully instituted a policy of a “hostile environment” for illegal immigrants. Although entirely legal, Irish immigrants had faced this unofficial policy for decades.

In aother narrative thread, when human remains are found at a construction site, reporter Anne and student Vinny uncover a world of unions, crime and police corruption. Vinny, born of an Irish father who left the family, applies to do a postgraduate degree on Irish immigration. Early in the novel he has this exchange with his supervisor;

“Can I ask what your interest in this is? Are you Irish?”

Vinny allowed himself to relax back against the chair. “No personal interest,” he said. “I just think it’s an area rich in potential. It’s a period when a lot was going on. The city was changing, not only geographically, but culturally. It’s also when the Scouse identity was being developed.”

“Connolly is an Irish name, isn’t it?” She asked.

“So, you are English, Irish, and Scouse?” she asked.

Vinny thought for a moment. He had never heard it put that way before. “Does it matter?” he asked.

In Liverpool Vinny, like me, received an education that privileged Catholicism without reference to Irish culture or nationality. While thousands followed St Patrick’s Day parades in Boston and New York, in Liverpool, often called the capital of Ireland, there were no parades or public celebrations of Irish independence.

My Dad’s Clancy Brothers, Bachelors and Val Doonican records were closest I came to Irish culture. So there was a real hunger for identity outside of religious confines. This may partly explain the vibrancy of adherence to Scouse culture. A common phrase and a banner seen at football grounds is “Scouse not English”. Although it has to be said that regional identity becomes much more attractive to everyone when the country is run by incompetents and buffoons.

Vinny and the characters in the novel face this crisis of identity with tragic consequences. Just as in real life, the line between class and nationality can sometimes be the line between life and death.

The postwar wave of emigrants are very elderly if they are still alive. My own father died a few years back. Happily he did revisit surviving family in Wicklow after many decades away. Others had additional reasons for leaving Ireland that meant they would never go back. Anyone who knows this community knows the tragic stories of pregnant girls, or survivors of the industrial schools for whom emigration became exile. Or the pensioner who can’t afford relocation and spend their last days alone in Britain.

The issue of Irish identity in first- and second-generation children continues to have an impact; separate Catholic and Protestant schools are relics of a sectarian past that reaches into the present.

In writing Under the Bridge I realised what many have always understood, that the present can not be divorced from the past. One book has turned into a series of four that cover the century from 1920 to 2020. The next couple of years will see the celebration and commemoration of many centenaries, from the War of Independence, the civil war, to the division of the island and the establishment of the republic.

100 years on, the questions of class, nationality and identity that brought about Brexit are once again coming to the fore on both sides of the Irish Sea. I have been lucky to receive some positive initial reviews. Two of my favourite lines are “This novel is a love letter to Liverpool” the second,: “A genuinely British and Irish thriller”.

For me Under the Bridge is a love letter to my father and the men and women of his generation that were truly English, Irish, and Scouse.

Jack Byrne was born and raised in Speke, Liverpool, although his parents first lived ‘Under the Bridge’ in Garston, Liverpool and all his family goes back to Wicklow. Under the Bridge (published by Northodox) is out now. Twitter: @jackbyrnewriter

The Killing Fields controversy: Why colourising old photos is always a falsification of history