‘A ghostly tradition underfoot’: the salvaging of Irish women’s writing

Irish women writing globally important literary works is not a new thing. They have always rocked the literary world and it is high time to pass their legacy on 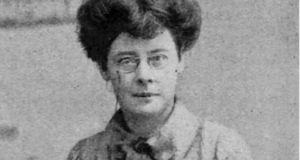 Beatrice Grimshaw achieved a prominent media profile, becoming an early entrant into the ranks of the celebrity author

The past few years have seen something of a #metoo moment for Irish literary history. Ever since the Abbey Theatre’s centenary celebration, Waking the Nation, announced its programme of almost wholly male-authored plays in 2015 and the #WakingTheFeminists protest swelled and seethed in its wake, there has been a vigorous public debate about the inclusion of Irish women’s writing in the country’s literary legacy. The conspicuous dearth of women writers in The Cambridge Companion to Irish Poets was seen as a tipping point in this discussion, and spawned an online movement (“Fired! Irish Women poets and the Canon”) dedicated to the project of publicising, querying and redressing the continued gender imbalance in Irish anthologies, textbooks and events.

This is a campaign that has long been waged in the academic world by pioneers including Patricia Couglan, Heidi Hansson, Margaret Kelleher, Gerardine Meaney and Ann Owens Weekes. Yet it is only very recently (and with help from social media) that such issues have entered public consciousness.

Our own idea for a book of essays, first conceived in 2012, came out of a desire to focus renewed scholarly attention on just a few of the largely forgotten Irish women who offer evidence of the rich seam of Irish women’s writing still to be mined. The enthusiastic response from established and emerging academics to our initial call for contributors overwhelmed us, and was an early indication that something like a seismic shift in attitudes towards writing by Irish women was imminent.

In her heartfelt and insightful foreword to the resulting volume, Irish Women’s Writing, 1878-1922: Advancing the Cause of Liberty, the writer and critic Lia Mills refers to the legacy of women’s writing as a “ghostly tradition underfoot”; a model for Irish women of the present and future that has long needed to be resurrected. Importantly, as Mills notes, this type of acknowledgement includes paying due attention not only to the quality and importance of the literary works produced by Irish women of the past, but also to their immersion in modes of production and skills as professionals well equipped to manoeuvre an ever-changing publishing market.

The researchers who contributed their voices and visions to the volume have broken new literary ground, unearthing in the process striking challenges to preconceived ideas about not only what the Irish literary landscape looks like, but how it was shaped. They highlight the dyanmics of the turn of the century moment and offer enlightening accounts as to the ways in which Irish women played the literary game with an incredible degree of success, and the extent to which they captured the imagination of a growing international readership.

Two authors featured in the volume illustrate this point exceptionally well. At the turn of the nineteenth century, the novelist LT Meade (who hailed from Bandon in Co Cork) edited a hugely influential (and often recognisably feminist) magazine for girls, Atalanta, and over her lifetime published well over 200 novels for girl readers. This is an impressive feat in any era, but particularly so in the staid Victorian age. Her 1893 novel, Beyond the Blue Mountains, was one of the works that achieved a lasting affection from its readers, some of whom went on to achieve literary renown. In his memoirs, Vladimir Nabokov remembered it as a favourite childhood book, praising it for its “exciting details”, and Julia Donaldson, author of The Gruffalo, likewise chose Meade’s novel, which she had long loved, for a discussion panel at the 2013 Edinburgh Festival.

Co Antrim native Beatrice Grimshaw meanwhile enthusiastically embraced the opportunities of the expanding and versatile literary marketplace of the period, carving out a commercially successful niche for herself by writing novels, journalism and travel books that took her around the world (sailing the South Seas to New Zealand, Australia and New Guinea). So successful was she that she achieved a prominent media profile, becoming an early entrant into the ranks of the celebrity author.

Irish Women’s Writing, 1878-1922 and a growing number of books like it stand in stark contrast to those who have recently excluded Irish women at their peril. The attempts to retrospectively justify or apologise for the respective imbalances in both the Abbey’s centenary programme of plays and the Cambridge Companion to Irish Poets have largely missed the point by emphasising a preoccupation with a contentious notion of “quality” in the work. Gerald Dawe, the Companion’s editor, suggested that the merit for inclusion in his volume was “excellence and influence”, by which he meant those writers who “achieved global recognition and canonical status”.

As in previous instances, the most influential examples of which were the 4th and 5th volumes of the Field Day Anthology of Irish Writing, attempts to acknowledge and make amends for the exclusion of women’s work from the realms of literary “excellence” have carried with them the rather uncomfortable sense of women’s writing somehow lagging behind, an afterthought or also-ran to the main event of an Irish literary tradition.

Among those at the forefront of public challenges to the parameters of tradition/canonicity is the Booker-winning novelist Anne Enright, who in a 2017 article for the London Review of Books pointed directly to the damaging effects of these repeated arguments “about excellence”. The image that is presented to aspiring writers, students, and the general public is what Enright terms “a male past”. This is a skewed version of the country’s literary history.

In 1891, a commentator in the Daily Graphic asserted that Irish fiction was, just then, “practically in the hands of Irish women”. But it is only over the past three decades that we have offered indisputable evidence to support this claim. The dust has been swept away from numerous books; a literary past is being salvaged. With initiatives such as Tramp Press’s Recovered Voices series (which launched in 2014 with Charlotte Riddell’s 1883 novel A Struggle for Fame) and Sinead Gleeson’s extraordinary anthology of short stories by Irish women writers (The Long Gaze Back and The Glass Shore), newly published texts are offering key opportunities for writers, readers, learners, students and teachers to recognise and explore the long and continuing legacy of writing by Irish women.

This battle is not over yet. What we are only beginning to recognise publicly, and what we will continue to acknowledge and expand upon, is that the phenomenon of Irish women writing globally important literary works (think Marina Carr, Eimear MacBride, Nuala Ní Dhomhnaill, Sinéad Morrissey, ….) has its precedents. Irish women have always rocked the literary world. It is high time to pass their legacy on.