With the toss of a wig! Mo Mowlam and the Belfast Agreement

As Northern Ireland secretary, her unique behavioural style, issue-based perspective and inclusivity were fundamental to the peace deal 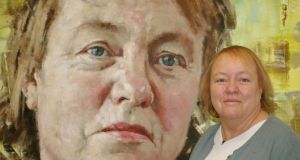 Mo Mowlam with her portrait painted by artist John Keane in 2002 at the National Portrait Gallery in London. Photograph: Kirsty Wigglesworth / PA 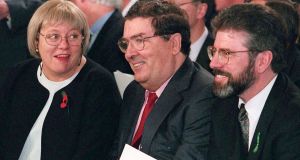 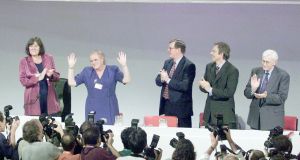 How important can a wig toss on a Monday, a hug on a Tuesday, and an expletive on a Wednesday really be to a peace process? Some people may argue not very. However, these were vital ingredients in the mixture that produced the Belfast Agreement.

The then British secretary of state for Northern Ireland, Marjorie “call me Mo” Mowlam, was a fundamental factor in the achievement of the agreement. She approached the role with a unique behavioural style, an issue-based perspective, and an inclusivity which all worked together to ensure her vital contribution to Northern Irish history.

Following New Labour’s 1997 election, it was clear that the party desired the injection of a new enthusiasm to conflict resolution in Northern Ireland. Mowlam was the hyperbolic manifestation of New Labour’s “popular touch”. Whether through sharing an apple with a child on the street, hugging shoppers on Royal Avenue, or referring to senior republican politicians as “babe”, she ensured that no one was immune from being the recipient of some Mo affection. Yet, with Mo, you were just as likely to be greeted with an expletive as you were with a term of endearment. She wasn’t shy of calling Martin McGuinness a bastard, of putting her feet on the table during meetings, or tossing off her wig.

Mowlam’s behaviour could be outlandish. It’s hard to think of another secretary of state who would have told the prime minister – Tony Blair – that she would rather be having “vigorous sexual intercourse” , or who would have written notes to the press secretary discussing which leading Irish republican she found sexier.

Mowlam’s conduct wasn’t always popular. It sent unionists running and admittedly carried with it the same power to divide people in to love/hate camps as black liquorice. However, Mowlam’s antics signalled a total rejection of previous British governmental norms, epitomising the break with historical precedent that New Labour aspired to achieve. This was important in appealing to republicans and people on the ground. Mowlam was no Patrick Mayhew, and she was no Kevin McNamara and, whilst these men were both capable politicians, personable Mo injected a much-needed interruption of procedure. She heightened appeal, she opened people’s minds, and she inserted a “get on with it” attitude in to talks that were saturated with the weight of deep historical divisions. Mowlam’s replacement of handshakes with hugs, her wig-tossing, and even her expletives, were all vitally important.

Mowlam also possessed a deep concern with the lives of ordinary people. She had a positive relationship with the Women’s Coalition, who introduced a different perspective to the talks, and made her mark visiting community organisations and projects. She exhibited an interest in issues affecting victims, women and children. For example, paying passionate attention to the potential positive benefits of integrated education. This concern with non-sectarian issues illustrated foresight regarding the Agreement’s longevity.

I am currently writing a PhD on the role of women in the peace process and have conducted interviews with a number of community workers. Remarkably, all the people I have spoken to remember some form of interaction with Mowlam, even if just seeing her from a distance. Mowlam’s visibility, and her demonstrative interest in class and gender-based issues, extended a sense of ownership and inclusion to constituencies who would become vital in the Agreement’s maintenance. The way in which she physically and metaphorically hugged these communities was uniquely Mo.

Mowlam’s outstanding legacy was her inclusiveness. Pivotal was her visit to the Maze prison on January 9th, 1998. Following the murder of loyalist Billy Wright by republican inmates, a number of loyalist paramilitary prisoners, including Johnny “Mad Dog” Adair, and Michael Stone, both serving life sentences for murder, withdrew their support from the negotiations. Prolonged maintenance of this position could have threatened the process entirely. Mowlam’s decision to enter the Maze was unprecedented and against all political advice. As a result, support was reinstated. The reason for this was not just what Mowlam said to the prisoners that day, it was the physical act of going and speaking to men who felt their voices were being excluded in favour of others. It is difficult to imagine another secretary of state being prepared to take this risk. Had Mowlam not succeeded here, there potentially would have been no negotiations being conducted in to the early hours of the morning of April 10th, 1998.

Did the fact that she was a woman matter? There is a well-worn stereotype that women have particular skills when it comes to peace making but it is untenable to suggest that all of Mowlam’s conduct was due to biology. It was not in the motivation behind her actions that Mo’s gender was most significant, but in the interpretation of them. Mowlam entered a conservative environment where being a female politician, never mind the first female secretary of state, had a serious novelty factor attached. In this environment, the fact that Mowlam was a woman meant that her actions had far greater reverberations.

Mowlam was not the only person to let an expletive slip out of her mouth at the peace table. However, she was the secretary of state, and a woman, and this made her partialness for the odd swear word far more endearing. In truth there were a number of factors that played a role in Mowlam’s effectiveness. Her gender was certainly one of them, her class, and even her illness perhaps significant. Undeniably most pertinent was the “Mo factor”. It was this, intertwined with her gender, that meant she was a force to be reckoned with.

Today Stormont sits out a protracted stalemate, and work still needs to be done to mitigate tensions and mistrust between communities. However, we shouldn’t forget that the signing of the agreement was a tremendous achievement, and achievements should be reflected on positively, as well as critically. I recently watched a 1999 appearance by Mowlam on the Late Late Show. When asked by a caller how she would like to be remembered, her response was “for bringing happiness” and “making a difference so that people can have a normal existence”. Just a few days later I happened to be walking round the Stormont estate and stumbled across the Mo Mowlam play park, a truly excellent play area, with every piece of equipment I could imagine wanting to play on as a child. As I listened to the sound of children’s laughter filling the air, so close to the seat of government, I couldn’t help but feel that the playpark encapsulates Mowlam’s spirit of inclusiveness perfectly.
Maria Dalton is a third-year PhD Candidate at the University of St Andrews. Her thesis explores the role of women in the Northern Irish Peace Process, with a special focus on the early 1990s and the period leading up to the signing of the Good Friday Agreement. Maria works as a tutor for undergraduate students within the department of International Relations at St Andrews, teaching on international relations theory, and issues in international relations.
This article form part of #Agreement20, an academic public engagement project organised between the University of Salford and King’s College London, featuring a conference hosted by the Irish World Heritage Centre in Manchester and funded by the Department of Foreign Affairs and Trade on April 6th and 7th 2018.

Yungblud: ‘My generation is over being divided’
5