The diverse performers, filmed during the height of pandemic, include actors Olwen Fouéré (above) and Tom Vaughan-Lawlor. Video: Department of Foreign Affairs and Trade 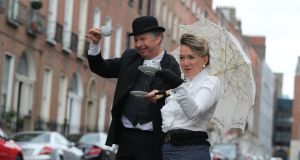 On a normal Bloomsday, parts of Dublin – and farther afield – witness celebration of James Joyce’s Ulysses. One of the most significant novels of the 20th century, Ulysses was first published in 1922, and is set on a single day, Thursday June 16th, 1904. It follows people and events related to its central character, Leopold Bloom, an Irish Jew and newspaper advertising salesman in Dublin, who gives his name to Bloomsday.

Were there no pandemic ruling out mass gatherings, June 16th 2020 would have the usual range of events and celebrations, from readings to drama to lectures. People visit the novel’s locations; others, in straw boaters and Edwardian frocks, tuck into offal-y hearty breakfasts, of piquant kidneys with a “fine tang of faintly scented urine”.

That was then; for this year, it’s mostly online – and there are plenty of virtual events for Bloomsday.

This year’s Bloomsday Festival – click here for all events – in Dublin has migrated online, with a large range of events. It’s hosting a virtual Bloomsday Breakfast from 8am on June 16th, on the James Joyce Centre Facebook or YouTube – enjoy a hearty breakfast ( “mutton kidneys, thick giblet soup, nutty gizzards, a stuffed roast heart, and liver slices fried with crust crumbs”, or whatever you’re having yourself), with performances and songs from Ulysses with Sinead Murphy, Darina Gallagher, Les Doherty and Elaine Reddy, before setting out on your virtual travels. Join here.

The festival, with national and international partners, includes performances adapted from Ulysses and raunchy renditions of Joyce’s poetry and letters. films, talks, and other events.

Dublin theatre company the Corps Ensemble has a mini festival within the Bloomsday festival this week. Their Bloomsday presentations online this week include the following:

Other Bloomsday Festival events include:

All Bloomsday Festival events are at bloomsdayfestival.ie.

A New Day Will Be, a global short film (just over three minutes long) marks this Bloomsday above all others. Select lines from Ulysses, echoing our 2020 pandemic world, are performed worldwide, in what becomes a moving commentary on the worldwide pandemic.

Filmed by Irish diplomatic missions co-ordinated by the Department of Foreign Affairs and Trade and the Museum of Literature Ireland (MoLI), the film features a mix of performers in multiple languages, from Irish actors Olwen Fouéré and Tom Vaughan-Lawlor to former US presidential candidates Beto O’Rourke and Pete Buttigieg, to novelist Colum McCann and leading European actors. View on the DFAT YouTubechannel.

Also in the Joycean marathon department is Re: Joyce!, an almost 30-hour production of James Joyce’s Ulysses airing on RTÉ radio (DAB and online worldwide channel RTÉ Radio 1 Extra) this Bloomsday. The full dramatised production, originally broadcast in 1982 to celebrate Joyce’s centenary, begins at the same time as both Stephen Dedalus’s and Leopold Bloom’s journey through Dublin begins in the book: 8am on June 16th.

RTÉ Culture’s Ulysses section include 20 explainer programmes, Reading Ulysses, hosted by Gerry O Flaherty and Fritz Senn, a programme hosted by Bernard Clarke and featuring Barry McGovern on the music in Joyce’s work and Joycesongs (music from the book performed by the RTÉ Concert Orchestra) and other audio and visual archive material. Find it here.

And the 40th annual Oxford James Joyce Night is at 7.30pm on YouTube via oxfordbloomsday.live/

One real-life exception to the online activity is Sweny’s chemist on Lincoln Place, Dublin 2 – no longer a functioning pharmacy but more a museum to Joyce. Little has changed there since 1847. This week there’s a table and canopy outside with baskets of their lemon soap for sale: “Mr Bloom raised a cake to his nostrils. Sweet lemony wax. – I’ll take this one, he said.” (Ulysses).

Visitors are welcome in person, and there’s an online marathon reading of the novel, with participants worldwide via Zoom, which started on Monday morning and will end on Bloomsday around 10pm. Watch, or join in – the public worldwide is invited to take part in the 36-hour online group reading of James Joyce’s Ulysses “from end to end”. Join “at any time and for as long as you like” on Sweny’s facebook page.