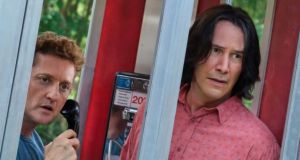 The first trailer has dropped for Bill & Ted Face the Music, the sequel to the cult comedy Bill & Ted’s Excellent Adventure, from 1989, and Bill & Ted’s Bogus Journey, from 1991.

Keanu Reeves and Alex Winter return as the would-be rockers who were once told they would save the universe. In the trailer for the new film, which is due out in August, they travel to the future to try to steal a song from their older selves.

Confronted by Holland Taylor’s Great Leader, she tells them: “Twenty-five years ago you played a concert in front of the entire world. One month ago you played in Barstow, California, for 40 people, most of whom were there for 2 Taco Night. Bill and Ted, what have you got to say for yourselves?”

Bill replies: “Be excellent to each other!”

Ted then adds: “And party on, dudes.”

He continues: “Bill, we have spent our whole lives trying to write the song that will unite the wold. Why can’t we just go to the future, when we have written it?”

The trailer shows the pair time-travelling in their phone box before meeting their heavily tattooed and muscled, orange-jumpsuited future selves in a prison yard. – PA