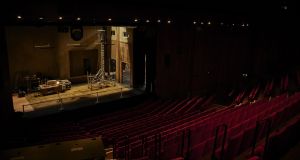 The Abbey Theatre during lockdown.

About 75 percent of people expressed concerns about going back to indoor venues such as gigs, concert halls, theatres and cinemas. Fifty-four per cent said they would be more likely to attend if numbers were limited. The Behaviour & Attitudes survey indicates huge challenges for those putting on performances in Ireland in the months ahead, especially in indoor venues.

Sixty-nine per cent of all Irish adults are classed as “arts goers” according to the research, with the researchers’ category of Aficionados (those who attend five or more types of arts events) accounting for a fifth of arts attendees.

The research was commissioned by the Arts Council, the government agency for the arts, in response to Covid-19. The pandemic has created a crisis in the sector, with many artists and arts organisations suddenly unable to work or present performances, and the public unable to experience entertainment.

The survey indicates a potential silver lining, with more people, especially younger age groups, experiencing the arts online during the crisis. More than half of this group would be willing to pay to access arts content online.

The online survey was conducted in June with the sample of 1,000 adults chosen to reflect the population. Eighty-one per cent of Irish adults indicate they attended an arts event in the pre-lockdown period.

Willingness to pay for future online arts activities among recent users is above 50 per cent.

Levels of high concern about indoor arts venues are high among aficionados, who are most familiar with the venues. Levels of concern are lowest among the youngest age group, and highest among women, in Dublin and urban areas.

Those surveyed suggested ways venues could encourage audiences back to live performance, with limits on capacity and providing face masks/gloves/sanitiser the top-ranked initiatives. Sixty-eight per cent of aficionados are more likely to attend when there is a limit on numbers.

Over a third of Irish adults have engaged with the arts online either pre- or post-lockdown, with online arts engagement peaking among ages under 34.