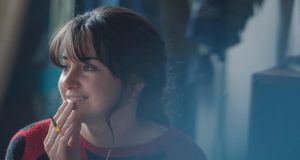 ENDINGS, BEGINNINGS ★★★☆☆
Directed by Drake Doremus. Starring Shailene Woodley, Jamie Dornan, Sebastian Stan, Matthew Gray Gubler, Lindsay Sloane, Wendie Malick, Kyra Sedgwick. VOD, 110 min
Throwing off any serious leaning towards structure, Doremus’s latest romance meanders amiably after young Daphne (Woodley) as she bounces between a hunky love-machine (Stan) and a hunky writer (Dornan). Doremus shoots the film as if his mobile camera is struggling to get the characters into frame. There is often something in the foreground. The light is hazy. It’s charming in its way, but a suspicion grows that there is nothing much worth discovering about these people. DC

Beauty and the Beast, the 1991 Disney animation, closes with a dedication: “To our friend Howard, who gave a mermaid her voice and a beast his soul, we will be forever grateful.” Howard, a documentary portrait of the Oscar-winning lyricist who died of Aids, presents Ashman as the crucial catalyst for change at the House of Mouse. The film makes it clear that Disney’s late-century renaissance relied heavily on Ashman’s clear head and good taste. A moving study of an influential figure. TB

Dealing with an ethnologist (Kongsli) probing around an endangered rural community, this Danish film has the quality of a high-brow essay in an austerely presented literary magazine. There is a lot to unpack, but not so much to have fun with. Talking to those who will be inconvenienced by the building of a tunnel to Germany, she uncovers truths about the sanctity of place and the meaning of home. The end result is a cautiously constructed document that allows mildly contradictory interpretations. DC

Impeccable timing or just the opposite? This quarantine chronicle concerns a group of eight new agers who, on September 26th, 1991, sealed themselves inside a gigantic, self-sustaining, $150 million glass biosphere. Their plan was to remain there for two years and to provide a blueprint for life in space. The social collapse is sparsely covered. One is left with dark hints rather than a satisfactory last act. Engaging viewing all the same. TB