Artists understand the desire for political change better than most 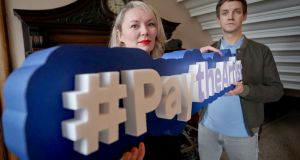 Artists Jesse Jones and Emmet Kirwan at the launch of Paying the Artist. Photograph: Maxwell’s

I’ve been away from this slot for a while, taking a busman’s holiday on our daily election podcast. Unsurprisingly, the experience got me thinking about how the worlds of culture and politics will intersect in Ireland in the 2020s. During the campaign, I chaired a hustings on the arts in Project Arts Centre in Dublin, in which representatives from seven political parties laid out their policies for the sector to an audience of artists and arts workers.

It was striking how vague most of those proposals were, and how modest the ambitions. There was rhetoric about supporting creative industries and ensuring that artists were paid properly for their work. But there weren’t many clear road maps to achieving those goals, whether through increased funding or legislative reform. In fact Fine Gael’s Josepha Madigan, the outgoing Minister, who drew plenty of angry criticism from the audience, was one of the few who could point to specific commitments to substantial year-on-year funding increases (albeit on a time frame that seems to have been subject to periodic face-saving readjustments).

Who knows what new government, if any, will come out of the new Dáil, but the odds are strongly against Madigan retaining her current position. And the equally strong likelihood is that the portfolio will pass to a non-Fine Gael minister for the first time in a decade. This will matter.

Just a couple of days after the election, the Arts Council launched Paying the Artist, its new policy aimed at getting rid of the widespread culture of freebies and underpayment in the arts, which is on the dubious proposition that “exposure” alone makes a gig worth doing for no financial reward. Actor and writer Emmet Kirwan poured scorn on that idea in a long-form poem at the launch:

“I’ll DJ with your first gig/ I’ll DP your first short/ But when the tickets start selling/ or the door man is getting paid/ or security is getting paid... /everybody in the building from the cleaning staff to one behind the big desk/ on the top floor is getting paid, but you’re getting paid in/ exposure.../ What is this exposure? It doesn’t pay bills.”

Kirwan and artist Jesse Jones both expressed a wish to see a left government emerging, but Jones was highly critical of what she had heard at the Project hustings.

“It filled me with anger, the lack of imagination that even our smartest people on the political left are not talking to artists enough,” she said. “Artists are part of the precarious working class that gave them a kick in the proverbial arse last week at the ballot boxes. We need to put class politics on the agenda and start talking about how hard it is to live in this country with one of the lowest rates of corporate tax in the world but where artists can’t afford to live.”

It won’t surprise many people that artists trend leftwards in their political views. What feels newer is how the key issues driving the vote for change in this election – generational inequality, access to affordable housing, precarious employment, underinvestment – are in such lockstep with the problems facing creative artists. It also highlights the potential for some fractious but dynamic debate within the sector itself. Economically insecure and marginalised freelancers prosper or perish because of the opinions and decisions of permanent, pensioned, property-owning administrators in a power relationship that mimics some of the worst attributes of neoliberal austerity.

All of this takes place against the backdrop of the international hegemony of big tech, which has hollowed out some of the ecosystems – an indigenous music industry, an economically viable local media – that previously helped to sustain cultural activity. You can even see the whole controversy over “exposure” as a consequence of the pressure social media-driven cultural change puts on people to build their “personal brands”.

What might all that mean for a new government and minister? It could mean new policies informed by a commitment to rolling back some of the excesses of globalised capitalism. That would mark a clear shift from the post-crash policies of the past 10 years. It could also change the framing of debates on culture policy.

That seemed to be what both Kirwan and Jones were calling for last week. It is of course very possible, if not probable, that the left-wing government they both want won’t happen this time. But it surely will at some point in this decade. And that will be interesting.