Book review: Eoin Colfer’s dragon has enough remove from humanity to make qualified statements on how horrific we are to each other 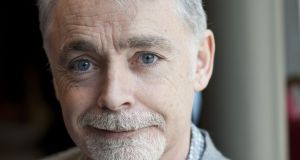 Eoin Colfer: a swamp in Louisiana gives him a whole new palate of linguistic flair and colloquialisms to play with. Photograph: David Levenson/Getty Images

Eoin Colfer is renowned for his children’s fantasy titles, not least the Artemis Fowl series which is shortly to have its cinematic debut in an adaptation helmed by Kenneth Brannagh. To date over half of his books for children have reached the New York Times bestseller list. In short, he knows what he’s doing when it comes to fantasy.

So Colfer’s move into the realm of adult fantasy literature was always going to be highly anticipated. And it’s a move into a genre that is already populated by household names such as George R. R. Martin, Robin Hobb, Brandon Sanderson and Neil Gaiman to list but a few.

Indeed, the comparisons with Neil Gaiman are almost inevitable for Eoin Colfer. He writes with a similar warmth and irreverence, and shares Gaiman’s fascination with the quirky human side of fantasy. The question then seems to be, is there space for Colfer’s specific brand of Irish wit within this already crowded space?

And the answer is yes. But that’s not exactly what we’re getting with Highfire. Primarily because it’s set in a swamp in Louisiana in southern United States. And while this gives Colfer a whole new palate of linguistic flair and colloquialisms to play with, it also, strangely, limits his traditionally expansive storytelling style.

Let’s set the scene. Once upon a time – which seems like the most appropriate fairy tale cliché – Vern the dragon wasn’t Vern at all. He was Wyvern, Lord Highfire of Highfire Eyrie, ruling at the height of a Dragon Age that seems to have faded from the collective memory of the modern-day humans he now finds himself living in the midst of.

Because Vern spends most of his time hiding in the backwaters of a Louisiana swamp trying not reveal his existence to boatloads of snap-happy tourists. And because Vern is the last of his kind – so far as he knows – his continued existence seems like a relatively important thing to take care of.

But what Vern can’t, and never could, account for are humans. When teenager Squib Moreau gets on the wrong side of the local sociopathic crooked cop Regence Hooke, Vern gets drawn into a vortex of events the likes of which he hasn’t gotten caught up in since that incident with the Spanish Inquisition.

It’s incredibly hard to write an original fantasy novel. And talking dragons are nothing new. But Colfer has managed to produce something fresh and infinitely readable here.

Vern in particular is an incendiary joy; a cantankerous, lonely and existentially challenged dragon with a proverbial heart of gold – or fire. He resides happily at the core of a novel that never quite reaches its potential but has a hell of a lot of fun trying.

Less satisfying than Colfer’s finely observed characterisations is his insistence on connecting the narrative to recent pop culture. References to Netflix and Grand Theft Auto – not to mention a particularly jarring one to Coldplay, of all things – sit uneasily within the general tone and banter of the novel’s Louisiana setting, and mean that Highfire will not only age badly but rapidly.

The best fantasy elevates itself above the standard trappings of the genre and makes a statement about society. Vern performs that classic function; a dragon with just enough remove from and awareness of the human race to make qualified statements on how utterly horrific we are to each other.

Black Beauty proved that defamiliarisation is even more effective when you go one species over for the running commentary on humanity; Colfer’s sardonically insightful dragon takes it to a whole other level.

Colfer’s style is compelling, his language inventive, and, most importantly, his ideas are entertaining. I just want more. There’s no bigger picture here, and you can feel the lack. Vern and Squib aren’t trying to save the world, they’re just trying to save themselves. And it shows. This is a small story. And it feels like it should have been bigger.

Highfire is deliciously funny at times. In a sea of forgettable modern fantasy titles, it offers moments of genuine originality.

It’s violent, but not quite violent enough. It’s witty but it’s not as razor sharp as some of Colfer’s best work. It’s ambitious but it could do better.

So, if this is the beginning of a series readers are entitled to feel intrigued. This reader, for one, wouldn’t mind seeing what Squib and Vern get up to in the future.