When John Steinbeck visited Ireland to trace his ancestral roots 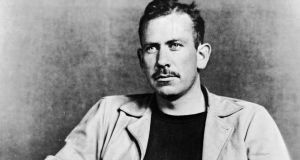 American author John Steinbeck (1902 - 1968). He won a Pulitzer Prize for his 1939 novel, ‘The Grapes of Wrath,’ and was awarded the Nobel Prize for Literature in 1962. Photograph: Hulton Archive/Getty Images

John Steinbeck, one of the greatest writers of the 20th century, died 50 years ago today. He was awarded the Nobel Prize for Literature in 1962. Ten years before that he paid a visit to Ireland to trace his ancestral roots. His mother’s family, the Hamiltons, were from Co Derry. He wrote an account of his Irish visit in Collier’s Magazine at the end of January 1953.

Steinbeck opened that account by declaring: “Every Irishman – and that means anyone with one drop of Irish blood – sooner or later makes a pilgrimage to the home of his ancestors.”

He told his readers that he had just made that pilgrimage. “I am half Irish, the rest of my blood being watered down with German and Massachusetts English. But Irish blood doesn’t water down very well; the strain must be very strong.”

Curiously, he seems to have shown little interest in his father’s Germanic roots and was much more drawn to his mother’s Irish lineage; from that source, he believed, came the stories, creativity and passion that inspired him to be a writer.

It was clear to him that his Irish ancestors carried with them warm and elevated memories of the country of their birth. “Only kings and heroes came from this Holy Island, and at the very top of the glittering pyramid was our family, the Hamiltons.” It was also clear, from what he wrote, that he had enormous respect and love for his grandfather, Samuel Hamilton, who emigrated from Co Derry during the Great Famine.

“My grandfather . . . was really a great man, a man of sweet speech and sweet courtesy. He died when I was quite young, but it is remarkable how much I remember about him.” Indeed, the Hamilton farm, in Monterey County, California, was very significant in the life and work of Steinbeck. He spent a lot of time on the farm when he was young.

It features frequently in his novels, for example as the Tiflin ranch in The Red Pony (1933), one of his earliest works. The character of Samuel Hamilton, the warm-hearted inventor and farmer, in one of his greatest novels, East of Eden, is based on his grandfather and some of the story is set on his farm. Samuel is the novel’s moral compass and plays a very important role as adviser, commentator and mentor. In a way, he is like the Chorus in a Greek tragedy: he witnesses many of the main events and provides appropriate reactions and comments.

Or he could be compared to the biblical Samuel, who makes prophecies based on God-given visions. One example would be: “There’s a black violence on this valley. I don’t know – I don’t know. It’s as though some old ghost haunted it out of the dead ocean below and troubled the air with unhappiness. It’s as secret as hidden sorrow. I don’t know what it is but I see it and feel it in the people here.”

East of Eden was published in September 1952, the same year that Steinbeck made his visit to Ireland.

Steinbeck’s grandfather never went back to Ireland but an uncle of the novelist did pay a return visit to Co Derry and he reported that the Hamilton family had almost died out; only three cousins remained, two sisters and a brother, and they were old and unmarried. One of them occasionally wrote to the Steinbeck family afterwards.

Steinbeck regretted that he had not visited Ireland earlier. “I should have gone to visit long ago but I didn’t. During the war, I landed at various Irish airports and could have gone, but some curious, powerful reluctance always came over me when I got close to the home place.” The letters from their Irish cousin had stopped and they had not heard anything more from Ireland.

He finally overcame the reluctance he could not explain and made the journey in late 1952. The trip did not begin well. He arrived on a Sunday and thought the city of Derry dour and unfriendly to the visitor. The hotel in which he was staying with his wife was bleak; it was hard to get a drink – and even food – outside of the permitted hours. A friendly porter, an exception among the hotel’s staff, did his best to help them but everything was locked away; no one was willing to break the rules.

In Steinbeck’s mind, it was incredible that Irish people were sticking to and slavishly obeying rules in this way. Knowing what he did about the country’s history, he thought every Irish person would be a rebel. “Has all illegality gone out of this rebellious island in three generations?” he asked the bewildered porter.

He wondered to himself if coming to Ireland had been a mistake. “Now my reluctance came on me tenfold and I wanted to give up the pilgrimage and go away quickly and forget it, because reality was violating every inherited memory and I was saying to myself that if the old folks went away from here, maybe they had good reason.”

He and his wife managed to locate a driver and went out into the countryside the next day where their mood lightened. “The countryside was rolling and lovely and the blackness of the city went out of us,” he declared, as they searched for a place called Mulkeraugh, which he knew was near to Ballykelly, which in turn was near to Limavady.

They drove around for a while until a local man sent them in the right direction. “Mulkeraugh isn’t a place at all. It’s a hill and three or four farms near about,” Steinbeck wrote. He learned that the last of his cousins had died two years before and that their farm had been sold. No one remembered his grandfather.

“It was the same everywhere we asked – my grandfather did not exist. So far as Ireland was concerned, there was no Samuel Hamilton. Why should they remember? The tree of our culture has no roots. Maybe I’d known that unconsciously, and that was why I had been reluctant to go back.” His grandfather’s brother who had stayed, and his children, were well known and remembered but “who could remember an old, old fact like my grandfather?”

Steinbeck was told that his cousins had a substantial farm of about 200 acres; they were comfortable, well-educated people and had more worldly possessions than most of the people round about. No one knew why none of the three of them had married. “They were well known, well liked. They grew old together.”

Katherine, who was the elder sister and the most efficient of the three, was like a mother to the only brother and he did everything she told him to do on the farm. She died 12 years before Steinbeck’s visit and with the directing head gone, the farm gradually went to pieces because the brother neglected it now that he had no one to tell him what to do.

The neighbours told Steinbeck that Elizabeth, the younger sister, always had her head in a book. She was very close to the brother and when he died, she “grew strange” as the neighbours cautiously put it, being reluctant to gossip about her. Sometimes she used to go out at night looking for him, barefoot and wearing only a nightdress.

“It wasn’t as though she was crazy. Except for that, she talked as good sense as anybody but she just could not bring herself to believe that her brother was dead.” When she died, the house was sold and all the contents auctioned.

Steinbeck went to see the old family home “and there was nothing of us there”. Elizabeth had been devoted to her rose garden and he became sad when he saw the state of it two years after her death, all overgrown with weeds and ivy.

He also visited the graveyard of the church at Ballykelly where his ancestors were buried. The sexton, he said, was “an old, old man, lean and dry, and his speech is like my grandfather’s speech”. The sexton gave him a red rose from the graveyard that was in full bloom.

“I took it. And that’s the seat of my culture and the origin of my being and the soil of my background, the one full-blown evidence of a thousand years of family. I have it pressed in a book.”