Trinity College’s new sculpture: 30 women to put on a pedestal

From Markievicz to Maeve Binchy, there’s no shortage of candidates to join its 40 men 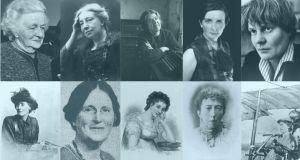 It has been more than 200 years coming, but better late than never: the provost of Trinity College Dublin wants the first woman to join the 40 men memorialised in marble busts in the Long Room of the Old Library.

Patrick Prendergast has asked for nominations for who should sit alongside Aristotle, Isaac Newton, Edmund Burke and Jonathan Swift, among others. The woman needn’t have a Trinity connection nor be Irish, just be a scholar who is no longer alive.

To get the ball rolling, here are 30 Irish scholars, writers and thinkers worth considering for the honour.

Thekla Beere (1901-91) The Irish civil servant chaired the Commission on the Status of Women in 1970 and was secretary of the department of transport and power – the first woman to lead a government department in Ireland.

Leland Bardwell (1922-2016) The work of the poet, novelist and playwright includes the novels The House and Mother to a Stranger, as well as a memoir, A Restless Life.

Maeve Binchy (1939-2012) The novelist, playwright, short-story writer, Irish Times columnist and former teacher was known for her sympathetic and often humorous portrayal of small-town Irish life and her interest in human nature.

Lilian Bland (1878-1971) The world’s first female aviation engineer was the first woman in Ireland to design, build and fly an aircraft, in 1910-11 – the Bland Mayfly. She also ran Belfast’s first Ford car dealership.

Elizabeth Bowen (1899-1973) The novelist and short-story writer was notable for some of the best fiction about life in wartime London. Her final novel, Eva Trout, or Changing Scenes, from 1968, won the James Tait Black Memorial Prize and was shortlisted for the Man Booker Prize.

Maeve Brennan (1917-93) The Irish short-story writer and journalist, who moved to the United States in 1934, was widely read there in the 1950s and 1960s but almost unknown in Ireland, although Dublin was the setting for many of her stories.

Brigid of Kildare (c450-525) The patron saint of Ireland, and goddess of poetry, healing and smithwork in Celtic myth, was also a powerful abbess, peacemaker and negotiator who secured women’s property rights, and freed trafficked women.

Margaret Ann Bulkley, aka Dr James Barry (c1792-1865) The Cork woman held the second-highest medical office in the British army, improved public health, sanitation and nutrition, and performed one of the first Caesarean sections survived by both mother and child. Her secret – that she was a woman – was discovered when she died.

Agnes Clerke (1842-1907) The Skibbereen-born astronomer’s book A Popular History of Astronomy during the Nineteenth Century is regarded as a seminal text. In 1981 Nasa named a crater on the moon, close to where Apollo 12 landed, in her honour.

Teresa Deevy (1894-1963) The Waterford-born dramatist, nationalist and women’s-rights activist was one of the most prolific and acclaimed woman playwrights in the world in her time. She was also a critic of Catholic repression of women and of censorship.

Maria Edgeworth (1768-1849) One of the most successful novelists of her generation, with a gift for social observation and dialogue, she portrayed the Irish peasant class as real people, with real stories.

Mary Elmes (1908-2002) The TCD graduate and aid worker was honoured as Righteous Among the Nations by Israel for saving the lives of more than 200 Jewish children during the second World War.

Sarah Mary Fitton (c1796-1874) This little-known Irish writer was the author, with her sister Elizabeth, the 1817 book Conversations on Botany. Consisting of 18 conversations between a mother and her son, it covered the principles of the Linnaean system of classification.

(Isabella) Augusta Gregory (1852-1932) Lady Gregory, originally Persse. Irish dramatist, folklorist and theatre manager. Cofounder of the Irish Literary Theatre and the Abbey Theatre, and writer of numerous plays for both, as well as books of Irish mythology.

Caroline Elinor Hussey (1941-2017) The Irish microbiologist and academic was president of the Irish Federation of University Teachers, first woman registrar and deputy president of University College Dublin, and chairwoman of the National Council for Curriculum and Assessment.

Molly Keane (1904-96) The novelist and playwright, originally Mary Nesta Skrine, also wrote as MJ Farrell about the world of the big houses of Ireland in the 1920s and 1930s. Best known for Good Behaviour and Time after Time.

Mary Lavin (1912-96) The pioneering novelist and short-story writer wrote about the concerns of women, Catholic faith and widowhood.

Kathleen Lynn (1874-1955) She was a medical doctor, specialising in ophthalmology; a volunteer in the soup kitchens during the 1913 Lockout; medical officer to the Irish Citizen Army during the Easter Rising of 1916, for which she was imprisoned; a campaigner for equal rights for women; and founder, with her partner, Madeleine ffrench-Mullen, of St Ultan’s Hospital for Infants, in Dublin. Elected to the Dáil in 1923.

Kay McNulty (1921-2006) One of the world’s first computer programmers, the Donegal-born woman was brought up in Pennsylvania and worked on the Eniac, the first general-purpose electronic digital computer, calculating trajectories for shells and bullets for soldiers using artillery guns.

Constance Georgine Markievicz (1868–1927) Countess Markievicz, previously Gore-Booth. The politician, revolutionary, nationalist, suffragist and socialist was the first woman elected to the Westminster parliament, was minister for labour in the first Dáil, and the first woman cabinet minister in Europe.

Annie Russell Maunder (1868-1947) The Tyrone-born mathematician graduated top of her year at Cambridge but didn’t get a degree because she was a woman. She was a “lady computer” at Greenwich Royal Observatory, in London, photographing the sun; the moon crater Maunder is named after her and her husband, Walter, as is the Maunder Minimum, the period from the mid 17th to the early 18th century when sun spots were unusually rare.

Iris Murdoch (1919-99) The novelist and philosopher is best known for her novels about good and evil, sexual relationships, morality and the power of the unconscious. Her first published novel, Under the Net, was selected in 1998 as one of Modern Library’s 100 best English-language novels of the 20th century.

Kate O’Brien (1897-1974) Novelist and playwright from Limerick, best known for her novels The Ante-Room, The Land of Spices, and That Lady.

Nuala O’Faolain (1940-2008) The journalist, TV producer and teacher also wrote two memoirs, Are You Somebody? and Almost There, and a biography of the Irish criminal Chicago May.

Annette Jocelyn Otway-Ruthven (1909-89) The medieval historian was Lecky professor at Trinity College Dublin from 1951 to 1981.

Somerville and Ross aka Edith Somerville (1858-1949) and Violet Florence Martin (1862-1915; writing as Martin Ross) A writing team perhaps most famous for their series of books made into the TV series The Irish RM.

Dorothy Stopford Price (1890-1954) The “rebel doctor” introduced the Bacillus Calmette-Guérin, or BCG, vaccination to Ireland. In the early 1920s, as a dispensary doctor in west Co Cork, she offered first-aid classes to the IRA. She was appointed head of the national vaccination programme in 1949.

Jane Wilde (c1821-1896) The linguist, poet (as Speranza), documenter of the Famine, women’s-rights activist and nationalist was a significant figure in 19th-century Ireland (and mother of Oscar).

Barbara Gertrude Yates (1919-98) The TCD maths graduate is, to the best of our knowledge, the first woman born and brought up in Ireland to gain a PhD in pure mathematics; a maths lecturer in Northern Ireland, Scotland and then England, she completed it in 1952.

‘There is something very cool about Irish people’
6

The Screamers: The story of a hippy commune in northwest Donegal in the 1970s
10