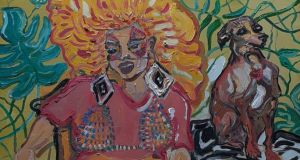 Madame Woof (2019) is an oil painting by Sheila Rennick

Painted with oil on canvas, Madame Woof is conventionally made, but is obviously not a straight representational image. Rennick uses caricaturish levels of distortion, heightened colour and disproportionate scale in compositions that have a bitingly satirical humour. She works from second-hand sources, whether photographs in publications or social media, making paintings that are social comedies of contemporary manners.

It is typical. Crucially, Rennick manages to not simply mock the subjects of her paintings, deluded and ridiculous as they apparently are, as a rule. She manages to pinpoint the space between our illusions and pretensions and the reality, allowing a kind of tragicomic glimpse of the human condition (a 2010 show was titled Hot Body/Ugly Face syndrome; another was called A Dog’s Dinner and a more recent series is Tinder Men). In particular she shows up our limitless, gullible investment in fads, fashions, codes and conventions, and our conviction that our ambitions will be fulfilled and desires satisfied if we make the right consumer choices and adopt the right social pose and profile.

Rennick is from Tuam in Co Galway. She studied at NCAD (winning a CAP Foundation award) and then went on to complete an MA at St Martins in London, where she is currently based. She also qualified as a teacher. She has consistently explored the fault-line between high art and low culture, harnessing the qualities of traditional media, notably oil paint and the conventions around its use, to produce objects that pointedly and cheerfully transgress those conventions.

Willem de Kooning famously remarked that “Flesh was the reason oil paint was invented”. Rennick takes oil’s fabulously sensual potential and pushes it to excess, with sickly concentrations of cloyingly sweet pigment. Her protagonists can appear monstrous.  Her recurrent use of animal imagery is interesting, both for the way animal characteristics can mirror particular human traits, and for the way animals are usually regarded as props and style signifiers by her human subjects. Her critique of a consumer culture of rampant excess is unmistakable, but, again, she is a curious observer of human propensities rather than a moralist offering a path to salvation.