The week’s best art shows: From an anxiety exhibition to Damien Hirst 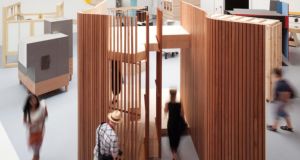 Close Encounters: Meetings with Remarkable Buildings Glucksman Gallery, University College Cork. Until June 20th glucksman.org As part of last year’s architectural Venice Biennale curated by Yvonne Farrell and Shelley McNamara, some 16 Irish architectural teams were invited to reimagine iconic 20th century buildings. The project was co-crated by Hugh Campbell. The exhibition, which includes elaborate installations, is now on view in the Glucksman and, later in the year, at Visual Carlow.

At One with Expression: Martin Mooney

Sol Art Gallery, Unit 3, The Times Building, D’Olier Street, Dublin. Until April 25th solart.ie For a painter with such an enthusiastic following, it’s surprising that Martin Mooney’s last show in Dublin was 12 years ago. His new work displays a lively engagement with the light and colour of, mostly, the northwest (he lives in Co Donegal), but also Connemara, Sandycove and elsewhere. Plus floral still lives.

Damien Hirst: At Play Gormleys Fine Art, 27 South Frederick Street, Dublin Until April 25th gormleys.ie A compendium of Damien Hirst’s printworks, made from 2005 onwards, including dots and butterflies. Hirst is up there with Andy Warhol in terms of celebrity artist status, his reach extending way beyond the habitual art audience, his name and personality functioning like a major brand. This collection of his graphic work should therefore draw in a wide public.

Studio 12, 1st Floor, Backwater Artists Group, Wandesford Quay, Cork Until May 3rd backwaterartists.ie An honest insight into the hard graft “of the making of a piece of work”, as Ben Reilly puts it. Not so much a progression from A to B as an uncertain ramble all around the alphabet: “working over a year collecting objects, taking photographs, making drawings, sometimes overlapping, often going nowhere and occasionally backwards.”