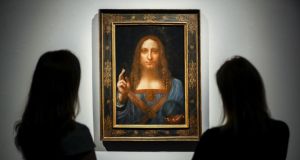 Salvator Mundi, the world’s most expensive painting, will not be part of this year’s big Leonardo da Vinci show in Paris because curators at the Louvre do not believe it can be attributed solely to the artist, it has been claimed.

The art historian and writer Ben Lewis has charted the remarkable story of a painting which made headlines all over the world when it sold for $450 million, or about €400 million, at Christie’s in New York in 2017.

Some of the world’s leading Leonardo experts, including Martin Kemp, emeritus professor of art history at Oxford, insist it is genuinely the lost work of the master. Others are more circumspect or dismissive.

The buyer has been identified as the crown prince of Saudi Arabia, Mohammed bin Salman, who reportedly agreed that it would become a star of the Louvre Abu Dhabi. It was also due to be lent to the Louvre in Paris for its big Leonardo show marking the 500th anniversary of his death.

The display in Abu Dhabi was unexpectedly halted last year, and its loan to Paris in the autumn will not happen, Lewis told the Hay literary festival.

“My inside sources at the Louvre, various sources, tell me that not many curators think this picture is an autograph Leonardo da Vinci. If they did exhibit it… they would want to exhibit it as ‘workshop’. If that’s the case it will be very unlikely that it will be shown, because the owner can’t possibly lend it… The value will go down to somewhere north of $1.5m”, or about €1.35 million.

Lewis is the author of the book The Last Leonardo, charting the painting’s extraordinary and tangled story.

The painting was bought by two American art dealers, taking a punt, in 2005 from a New Orleans estate sale for $1,175 (€1,050). It was in a pitiful state. After years of restoration experts became convinced it was genuinely a lost Leonardo, and it was included in the National Gallery’s blockbuster show in London in 2011.

Since its sale there has been silence. Mystery surrounds its whereabouts, although Lewis is convinced that it is in high-security storage in a Swiss free port, where it will not attract customs duties, as it is classed as being in transit. “It is the painting that dare not show its face,” Lewis said. – Guardian