A wealth of invention at the RHA's annual exhibition 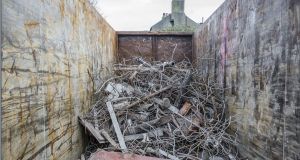 This year’s RHA annual exhibition, the 189th, is the first to take place under the aegis of an academy president who is a woman – the artist Abigail O’Brien. In her preface to the catalogue, she mentions that the show also marks Patrick T Murphy’s 20th anniversary as director (largely during which time the institution has been comprehensively transformed and weathered the economic storms), and that the past year saw the publication of John Turpin’s definitive history of the RHA. That meticulous two-volume history details an academy always fighting against the odds to survive, and constantly evolving. It also explains very convincingly how circumstances and personalities happened to configure the academy as a retrograde, culturally conservative bastion early in the 20th century, a role that lasted for too many decades.

Postmodernism and developments since helped to relocate the RHA so that it convincingly occupies a changed aesthetic landscape, but many individuals have also been vital to the process. Each annual exhibition is a snapshot of where the academy is and how it is faring. Cautiously optimistic is probably a fair assessment this year: initial attendance is up, sales are up. The show itself is slightly leaner than last year. The work on view is generally very good even if highlights are relatively few. There is though a wealth of invention in a mass of smaller pieces, those works you could easily pass by without a second glance.

The catalogue theme, proposed by secretary Una Sealy, is architecture, and it does find its way from between the covers of the catalogue into the exhibition to some extent. One of the real standout pieces is an extraordinary architectural cabinet incorporating detailed models and images of a project by John McLaughlin Architects – who were invited to exhibit. It’s a modernist intervention, a timber-frame mews house in a conservation area of Dún Laoghaire. At ground level its external walls adopt the granite blocks so plentiful in the area, but the upper storey is black charred larch. The cabinet is a gem.

If you are looking for a sense of activist engagement with the current homeless crisis, or for that matter with other pressing issues such as Brexit or climate change, you will probably be disappointed. But you should not be. A great deal of the work on view does suggest an awareness of and attentiveness to these concerns. The McLaughlin cabinet is in part a meditation on what a house is or might be, and how it fits into and forms part of an urban fabric, and it is an argument for high aesthetic values and careful attention to detail, considerations that should apply to all dwellings, but can get lost in the mix.

One of the best paintings in the show, by Colin Martin, is based on a photographic view of the interior of the International Space Station. The frenetically busy surface of Martin’s painting matches the densely packed enclosure of the station, a life-support machine in which the sheer concentration of interlocking mechanisms, devices and who knows what appears not just messy but chaotic, yet is absolutely functional. Martin’s painting is not photographic. As with abstract painting, the brushstroke is often the detail, but in this case the brushstroke corresponds to, say, a loop of cable or explanatory post-it notes stuck to the surface. As with the space station, every detail does a job. It’s representation as jigsaw puzzle.

From an ultra sophisticated dwelling in an extreme environment to urban brutalism. Jeanette Lowe’s Skip Sculpture is a photograph, a symmetrical view into an industrial scale skip heaped with a jumble of cable and metals ripped out of a building. Abstract but utterly rooted in the real. It’s from a series titled Disappearing Dublin in which she documents the destruction of social housing projects in the city in a way that has resonance way beyond the local. Dorothy Smith’s drawing High Rise, meanwhile, from an artist known for her thoughtful explorations of urban architectural spaces, is a tottering stack of wood palettes. All in all, you will find much of relevance to housing in all its aspects throughout the exhibition.

The RHA numbers architects among its members, and Maeve McCarthy’s portrait of one of them, Des McMahon, a former president, features in a strong portraiture strand. Two of the best are self-portraits: Miseon Lee’s and Sahoko Blake’s, both absolutely outstanding. The portrait as character study is a trend, as in Una Sealy’s Dandy, or Sharon Murphy’s Aoife/Cordelia, Michael Cullen’s Photographer and Mick O’Dea’s Druid’s The Three Kings.

The gender-balanced, six-strong selection committee sorted through almost 2,700 works and chose roughly 11 or 12 per cent for inclusion, which means a lot of disappointed artists. This year, in another first, the selection process was partly observed by filmmakers Hilary Fennell and Mark McLoughlin, who were following the progress of six artists, from making work in their studios to seeing it on view in the RHA – or not. Their documentary will be broadcast by RTÉ during the month of June.

One’s heart goes out to those artists who didn’t make the cut, especially if you make your way through the exhibition – still numbering about 500 works even if slightly slimmed down – and appreciate the subtlety of so much of what is on offer. Those dozens of fine small pieces, for example, each representative of a particular way of seeing, thinking and feeling, and each totally worthy of consideration and respect. There hasn’t been an annual exhibition every year of the RHA’s history. It’s heading towards its 200th anniversary in 2023, still evolving, still facing challenges. And most importantly, still surviving.         Exhibition runs at Royal Hibernian Academy, 15 Ely Place, until August 10th