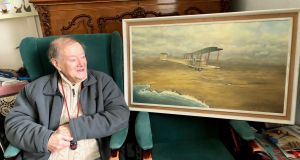 In Morton’s lifetime, mankind has gone from crash-landing in a bog in Clifden, Co Galway, as the intrepid pair had done on June 15th, 1919, to sending space probes to the outer reaches of the solar system and beyond.

The downstairs room of his home in Leopardstown where he still lives is festooned with 100th birthday cards. His daughter, Birgitta Lee, even managed to buy 100th birthday balloons in Woodie’s. That such things exist says much about rising life expectancies.

Still, becoming a centenarian is an extremely rare event and few have reached that milestone as lucid as he is.

“I’m surprised at the interest that people have in me,” he says. “I don’t feel any different. I can’t do things I used to do, but my memory and knowledge is very good. I can still remember a lot of the things that I learned.”

After he retired from his career as an architectural draughtsman in the Commissioners of Irish Lights 35 years ago, Morton embarked on another career as an aviation and nautical painter. The walls of his home are full of his work with a particular penchant for first World War aircraft while his portrait of the Titanic hangs on the wall over his bed.

Pride of place in his collection is the painting he did “about 20 years ago”, he says, of Alcock and Brown making landfall off the west of Ireland, the dun-coloured landscape meshing with the colour of the flimsy aircraft coming into land.

“When I went to visit lighthouses, I flew by helicopter. That area that I painted, I flew over several times. I got to know exactly what it was like,” he said. He got working drawings of the aircraft and photographs as back up. “I painted in anticipation of the centenary,” he adds, fully expecting that he would be there to witness it.

Morton puts his long life down to moderation. He does drink, but only a little, and quit smoking 40 years ago. He eats and drinks well and used to walk and swim a lot. “Any thoughts I had on [reaching 100] would be, why not?. That would be my attitude. There was nothing going to stop me. I was intelligent enough to try and live the best life that I could.”

Morton was born in Hermitage, Co Kilkenny, into a Church of Ireland family. Many people, he says, think he is a Catholic because he admired Pope John Paul II, but his admiration, he stresses, is part of his general admiration of the Poles going back to the second World War.

During the war Morton emigrated to Britain for work. “There was a fellow over in the labour exchange looking for workers. I got a job as draughtsman in England with Vickers-Armstrongs. I never got to Vickers because it was bombed before I got there,” he recalls.

Instead, he went working in an aircraft repair facility in Blackpool, Lancashire. There he met exiled Polish airmen. “They would fly anything. If necessary they would crash the planes into the Germans, they hated them so much.”

Morton, by his own admission and that of two daughters, Birgitta and Louella, has never been sick a day in his life. The only time he was hospitalised was when he fell off the roof around 2000. His wife, Sylvia, died two years ago, aged 84. She was 14 years younger than him.

He is longer retired (35 years) than he spent in the Commissioners of Irish Lights (34 years). At the age of 65 he started a new career as a painter.

“I resolved to become among the leading aviation and marine artists in the world. People would say, ‘That’s a tall order for you. You’ve never been to an arts school in your life’, but I could teach the arts schools more than they could ever teach me,” he says.

Confirmation came, he says, when he was chosen to design a new cover for the bestseller Wings Over the Somme by British first World War ace Gwilym Hugh Lewis which was reproduced in 1996 after the first iteration sold out.

Morton won the commission and with it vindication for the new road he had taken on retirement.