The Last Leonardo review: Making an argument for value of art 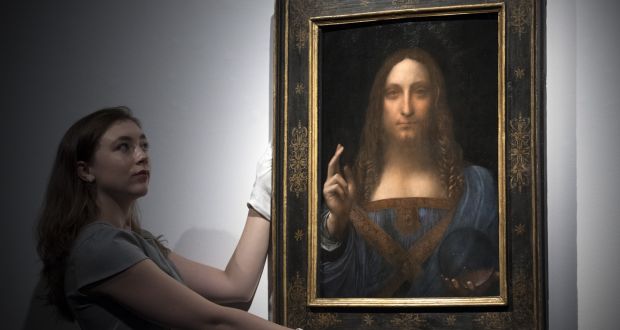 Salvador Mundi: a half-figure portrait of Christ painted on a walnut wood panel

Book Title:
The Last Leonardo: The Secret Lives of the World’s Most Expensive Painting

Less than two years ago, the sale of Leonardo da Vinci’s Salvator Mundi made international headlines, when, for an absurd $450.3 million (€401 million), it became the world’s most expensive painting sold at auction. Anyone not satisfied by clicking on an over-lit spectacle of urgent men on auction house phones had more questions. How could any piece of art be worth that much? What kind of person has that kind of money? There wasn’t much joy to be had at the time: the painting was widely acknowledged not only to be in terrible condition, but of questionable authenticity; the buyer was not immediately disclosed, and the sales history of the painting only brought up more questions.

In The Last Leonardo, art critic and documentary filmmaker Ben Lewis sets out not only to tell the complicated history of Salvator Mundi, but to make an argument for the value of art, before the market bursts. To anyone who has read his criticism, seen his BBC Four series Art Safari or his film The Great Contemporary Art Bubble this will not come as a surprise. Lewis is keenly aware, if not earnestly committed to exposing, the perils of the unregulated art market, and has implicated most of the contemporary art world, from artists to dealers to oligarchs, in its monstrous inflation.

The Salvator Mundi, however, is far from contemporary: it is a half-figure portrait of Christ painted on a walnut wood panel, showing the face, chest and arms, with one hand raised in blessing and the other holding a transparent orb. Although Lewis’s story begins in 2008 with the private art dealer Robert Simon putting his “slim but oversized case” into a first-class airline compartment, we quickly leave Simon behind to find ourselves soaring over the shipyards, taverns, and bakeries of 15th-century Milan, towards farmlands “once dotted with walnut trees.” Lewis locates Leonardo in the shade of the trees’ thick canopies, making notes on direct light and lustre (reflected light) and on “the basic mathematical laws of their growth.”

Although it is hard not to be impressed by Leonardo da Vinci, the swarm of scholars who have interpreted his manuscripts and codices can easily overstate his genius. Lewis’ portrait of the artist-engineer, however, as a “dreamer, a doodler, and a dawdler,” is refreshingly compelling. He gives us an icon who fails, who reneges on contracts, who worries over “not being a man of letters,” and spends too long decorating palaces and designing mechanical lions for young princes. This Leonardo is not so much a grandiose artist-engineer, but a man who rarely leaves his studio without a notebook hanging from his belt, as committed to drawing from life as he is to questioning everything – from the grey colour of the moon to “why dogs willingly sniff one another’s bottoms.”

As we follow the small portrait (and its many copies) from the end of the 15th century all the way to the 21st, we meet the kings, collectors, art advisors and agents of French and Spanish courts, chamberlains, spies, experts, curators and conservators who keep its legend alive. These include handsome young Charles I, who jumps over a palace wall to seduce a Spanish princess and falls in love with art instead; the Bohemian printmaker Wenceslaus Hollar, who makes thousands of etchings of Dutch and English collections; the Countess Martine de Béhague, who receives her guests “reclining on a sofa covered with animal skins, and wearing a green wig” and Alex Parish, the small-time dealer who, in 2005, clicking through a database, found a photograph of the Salvator Mundi and bought it from a gallery in New Orleans for a mere $1,175 (€1,050). Finally there’s Dmitry Rybolovlev, the icy Russian “Fertilizer King” who put it back on the block, and the undisclosed buyer, Crown Prince Mohammed bin Salman, who, in a coup assisted by Donald Trump’s White House, has become the de facto ruler of Saudi Arabia.

These lively and ultimately sinister sketches from over the centuries amount to the Salvator Mundi’s provenance, a branch of art historical research defined as “a record of ownership of a work of art, used as a guide to authenticity or quality.” “The study of provenance,” Lewis also reminds us, “serves a practical economic purpose, since the value of a painting rises according to how important its previous owners were.” Kings and queens are at the top of the scale, and “incoming tides of mercantilism, globalisation and technology” soon carry “arriviste financiers, industrialists, entrepreneurs” into the same market.

Needless to say, a veritable army of scholars, experts, connoisseurs and FBI agents have contributed in one way or another to the provenance of the Salvator Mundi. Lewis seems, at times, at pains to refute their claims about the painting, and to make new ones. But he’s wise enough to realise that the value of the Salvator Mundi, like it’s supposed sister Mona Lisa, is in the questions, not the answers, which are prompted by the faint smile its history evokes. Although many of his sources would disdain the idea that their work served any “practical economic purpose,” there is no doubt that they’ve helped Ben Lewis put together a deliciously detailed, satisfying book, that is simultaneously a call for change.