Pierre Bonnard: The bright palette of a tortured soul 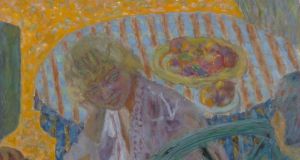 Love rivals: Young Women in the Garden by Pierre Bonnard

Pierre Bonnard (1867-1947) was unusual because he painted only from memory, never from life. He inscribed his datebook daily with a small pencil sketch and a one or two-word summary of the weather: rainy, sunny, warm, damp... The French word le temps means time as well as weather, so Bonnard’s datebook reminded him of both. He used these simple annotations to nourish his imagination.

For  Pierre Bonnard, the Colour of Memory, the Tate Modern has transformed half a floor of the former power station into a dazzling tribute to a quintessentially French painter. The title correctly identifies colour and memory as the two most salient features of Bonnard’s art.

Early in his career, Bonnard said, Japanese prints taught him “that colour could express all things without needing modelling or relief… that it was possible to translate light, form and character with nothing more than colour.”

Though Bonnard is usually classified a neo-Impressionist, he adopted the brilliant colours of the Fauves. In 1909, he visited Saint-Tropez and was stunned by the Mediterranean colours, “the sea, the yellow walls, the shadows as coloured as the light”.

Thereafter, Bonnard painted even the Normandy countryside with a Mediterranean palette. Most often, as in Dining Room in the Country (1913, Minneapolis Institute of Art), the painter looks out across a table set with fruit or breakfast at a flourishing garden. Female characters seated at the table or leaning on the window sill are expressionless, incidental elements of the décor. By contrast, pet dogs and cats sometimes appear almost human.

Bonnard used windows, doors and mirrors as composition devices. But they are also metaphysical, creating a constant flow between reality and reflection, between interior and exterior, the painter’s inner life and the world outside. In the Tate’s Bowl of Milk (c 1919), the Mediterranean sparkles beyond a closed window. The room is in shadow. Bonnard’s ill-fated mistress, Renée Monchaty, is the statuesque woman in a pink dress, holding a saucer of milk for the black cat at her feet. Time is suspended.

In The Window (1925), also from the Tate’s collection, vertical and diagonal lines organise the canvas into neat sections, with red-roofed houses in the upper left quadrant. The woman leaning on the wrought iron balcony almost goes unnoticed. A green shutter, window jamb and knob fill the upper right. In the bottom third of the painting, the desk, pen and ink, a white sheet of paper and a book titled Marie pull the window panes harmoniously together.

Cozy, bourgeois interiors combined with Bonnard’s bright palette earned him a reputation as the painter of happiness. Yet on closer examination, Bonnard’s warm colours sometimes go cold. The silent, mysterious paintings with their subdued figures seem to ask if happiness is possible. “The one who sings is not always happy,” Bonnard warned.

Dina Vierny, who modelled for Bonnard, once accompanied him to the Salon d’Automne. “All of a sudden, I saw Bonnard pull paint and a brush from his pocket and start retouching the paintings which no longer belonged to him,” Vierny wrote. “Bonnard, what are you doing? We’re going to get arrested!” Vierny exclaimed. “You be the lookout,” he told her.

Bonnard’s fellow painters and art historians long debated his legacy. Picasso scathingly called him “just another neo-Impressionist, a failure, the end of an old idea, not the beginning of a new one”.

Bonnard ignored Fauvism and Cubism, the major innovations of his time. “I do not belong to any school,” he said in 1891. “I am only trying to do something personal, and I am trying to unlearn…what I worked so hard to learn during four years at the École des Beaux-Arts.”

In 1893, the normally shy Bonnard followed a young woman who who went by the name of Marthe de Méligny from a tram stop. She worked at the Maison Trousselier making artificial flowers. The daughter of a carpenter and a seamstress, Marthe’s childhood was marred by the deaths of her father and a sister. She was anti-social and obsessed with cleanliness. It is not clear whether she suffered from tuberculosis, asthma or nervous disorders. Her doctors prescribed baths.

Because they travelled to Normandy in summer, the Côte d’Azur in winter, and to spas elsewhere for her ailments, Bonnard rolled his paintings and took them with him. He did not use an easel, but tacked canvases to the wall wherever he happened to be working. At the Tate Modern, an entire room of paintings have been divested of their ornate gold frames, giving a sense of how Bonnard saw his own paintings.

The much younger Renée Monchaty became Bonnard’s lover and modelled for about 20 paintings. In 1925, Bonnard proposed to Renée, but Marthe persuaded him to marry her instead. At the ceremony, Bonnard discovered that Marthe’s real name was Maria Boursin.

Renée took her own life three weeks after Bonnard married. In The Mantlepiece (1916, private collection), Renée is nude and faces a mirror above a fireplace. A painting by Bonnard’s friend Maurice Denis, since lost, is reflected in the mirror. What appears to be a brown head of hair in the lower right hand corner may represent Marthe.

Renée stands in the position of a dying Niobid, after Niobe, the woman who insulted a Greek goddess by thinking herself more worthy, just as Renée dreamed of displacing Marthe. The painting was almost prophetic. Apollo and Artemis killed Niobe’s children with an arrow between the shoulder blade.

Bonnard brought his rival loves together in Young Women in the Garden, from a private collection. The painting is symbolic of Bonnard’s torn psyche and is the first in the Tate’s exhibition. He started the painting in 1921, before Renée’s death, then set it aside until after his wife died in 1942.

Renée appears wreathed in a golden halo of hair, while dark-haired Marthe looks on from the bottom right edge of the canvas. Renée rests her head on one hand and smiles. A chair back separates them, like a spoked wheel or shield.

In Bonnard’s early paintings of Marthe, she languishes on beds or contemplates her graceful figure in mirrors. In the lovely Nude in an Interior (c 1935, National Gallery of Art, Washington), decorative, juxtaposed planes of blue-green, orange and mauve are bisected by a woman’s half-hidden body. It is impossible to say if she is Marthe or Renée remembered. Her right arm is raised, just like Renée’s in The Mantlepiece.

Yet when Marthe died of a heart attack, after 49 years of conjugal life with Bonnard, the painter was devastated. “You cannot imagine my grief and solitude,” he wrote to Matisse. The distraught painter said he was “filled with bitterness and worried about the life I may be leading from now on”.

In early photographs, Bonnard had a gentle, bearded, intelligent face. As he aged, he grew thin and stoop shouldered. In 1931, at the age of 64, he painted himself as The Boxer (Musée d’Orsay). His arms are raised, his fists clenched impotently, his face partially obscured by shadow. This Bonnard is a tormented soul, at antipodes from his image as the painter of happiness.

On his deathbed, Bonnard was obsessed with completing his last painting, of a flowering almond tree. He was too weak to hold a paintbrush and asked his nephew to change the colour of the bottom left foreground from green to yellow.

Another late painting, The Studio with Mimosa (1939-46 Centre Pompidou, Paris), calls to mind Matisse’s paintings of his atelier. Bonnard’s Studio is such an explosion of joyous yellow that the myth of the painter of happiness again takes hold. Then you notice a ghostlike woman’s face in the lower left corner. One presumes she is Marthe, an ever present memory of love and loss.

Pierre Bonnard, the Colour of Memory, is at the Tate Modern, London, until May 6th