How one Luke Kelly statue for Dublin city became two 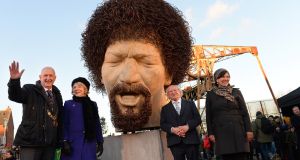 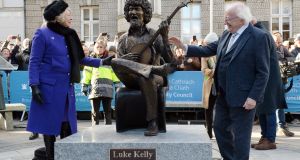 We all have our heroes, some of us may even do heroic things, but it is not given to everyone to have a statue erected in their memory, never mind two. As we recently noted in these pages, there’s a grave imbalance of memorials to women, but that’s another story. Luke Kelly of The Dubliners, who died in 1984, is the only person to have more than one statue in Dublin, and the unusual event clearly caught the public imagination. An April Fool story claimed that one more was under commission, to create an Auld Triangle of Luke Kellys.

The story of how the two Lukes came about is the subject of a new documentary, which includes the voices of children in Kelly’s old primary school, St Laurence O’Toole’s CBS in Dublin’s north inner city; a trip to the studio of Vera Klute, who was commissioned to make one of the statues; and the tale of graphic artist and music lover Gerry Hunt, who ordered up the second Luke Kelly for his own back garden.

Of the “two Lukes”, one is a more traditional bronze figure, by artist John Coll, who also made the beloved Patrick Kavanagh sculpture on Dublin’s Grand Canal. Coll’s Luke now sits on South King Street. I have managed to pass it without noticing it, which can be both good and bad in terms of public sculpture. Klute’s Luke is a somewhat wilder thing. A huge marble head, topped with three thousand strands of metal hair, it’s the kind of piece that’s impossible to ignore.

Sometimes a memorial commission is a double-edged sword. When a sculpture of footballer Christiano Ronaldo was unveiled at Madeira airport in 2017, there was widespread derision. The artist responsible, Emanuel Santos, declared his hurt and dismay, but nonetheless had another go, and made a more traditional version to replace it. The first one is growing on me; it has more life. “It is impossible to please the Greeks and Trojans. Neither did Jesus please everyone,” Santos said at the time.

And that’s the problem with memorials: they exist in an interesting hinterland between private and public. When the subject of the memorial has living relatives, their wishes are frequently considered paramount, and yet public art is for everyone, and for generations to come. So who does “own” public people? In the case of the two Lukes, having seen a model of Klute’s work, some of the Kelly family were, to say the least, uncomfortable with its striking design. Enter Gerry Hunt, who showed them his own near-finished Kelly sculpture, and offered to donate it to the city.

Exercising a great deal of tact (or simply with the survivor’s instinct for avoiding conflict), Dublin City Council decided to go ahead with the two and, doing sterling work, they were both unveiled by President Michael D Higgins on the same day last January. But how do the statues on our city streets come about? According to Ruairí Ó Cuív, public art manager with the city council, the first criterion is the person being commemorated has to be dead for 20 years. There is full policy document, laying out the whys and wherefores, and Ó Cuív says his office receives an average of two or three requests a year. “The volume has reduced since the understanding of the 20-year rule has become more widespread,” he says. “The city centre is really choc-a-bloc [with sculptures] and it amazes people there are so few suitable sites,” he adds.

The memorial to Kelly had been in the pipeline for more than a decade, first falling victim to the recession. Kelly’s brother John credits Cllr Christy Burke for driving it through during his term of office as Lord Mayor of Dublin. In the documentary, John Sheahan of The Dubliners says, “What would Luke think about it? He’d say they have little to be doing, doing a statue of me.” I ask John Kelly the same question: “He’d be charmed. Probably a bit embarrassed, but charmed nonetheless.”

Sculptures, even the most lifelike, are abstracted parts of a person. It’s the skill of the artist that adds the personality. “It’s a very frightening resemblance of him,” says a bystander at the unveiling of Klute’s Kelly. “It’s definitely Luke,” says another. “It’s striking,” agrees John Kelly, though I get the sense he is being very diplomatic. The tradition of marble-sculpted or bronze-cast nobles on horseback have somewhat spoiled us, creating an idea of the memorial as a lifelike thing, within a very narrow set of expectations. The memorial, at least in the short term, becomes what the living want the person to have been, and that doesn’t leave much space for what might be, in the longer term, more interesting abstraction.

At Luke Kelly park, near Sherrif Street, where Klute’s sculpture is sited, local children take it upon themselves to pick out bits of rubbish that have caught in the sculpture’s metal hair. “The family are very proud of the two sculptures,” says John Kelly. “But,” he pauses, “The Dubliners were a group. You have to remember that too.” And for them, the memorial is also, of course, the music, the wonderful, wonderful music.

Two Lukes will be on RTÉ One at 6.30pm on Easter Monday