People of Moyross: Portrait of a housing estate 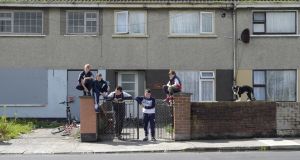 “I felt it was important to represent and portray the homes – or lack of – and the land as a means of telling a story, a story of gentrification and what greed of the middle classes has done to this community.” Photograph: Jamin Keogh

If photographs are a window on life and reality, then a new exhibition capturing present-day images of the Limerick suburb of Moyross give a glimmer of a more hopeful future.

Moyross Study is a sociological exploration of a housing estate, which in 2006 became the catalyst for regeneration after a petrol bomb attack left two young children with horrific injuries.

Jamin Keogh, the artist and photographer behind Moyross Study, believes his images challenge the stereotypes and help undo the stigma deeply associated with Moyross, where despite its difficult past a community persists and thrives.

Many of Keogh’s photographs, particularly those of young children playing outside, are in stark contrast to the images of fearful residents, gangland criminals and burnt-out cars and homes that dominated headlines and news bulletins for well over a decade at the height of Limerick’s feuding violence.

The Moyross exhibition, according to the artist, also aims to highlight what he claims is the “catastrophic topographical adjustments” that have taken place in the northside estate since the Limerick regeneration programme commenced.

“I felt it was important to represent and portray the homes – or lack of – and the land as a means of telling a story, a story of gentrification and what greed of the middle classes has done to this community,” he says.

Keogh, a native of Limerick, describes the exhibition as the introductory phase to a larger project, which he plans to exhibit in his native city at a future stage.

Moyross Study covers four themes: regeneration, the community, surveillance and what the artist describes as the “relentless segregation” endured by the people of Moyross.

“What I am addressing are themes of gentrification disguised as urban renewal, or in my opinion a land grab,” he explains.

The theme of surveillance is illustrated in Keogh’s photographs of some of the 58 CCTV cameras dotted around the Moyross landscape.

“Many of the local kids who are now teenagers don’t know life without them [the cameras], and for them it would be very strange if the cameras weren’t there,” he says.

The 35-year-old Dublin-based photographer says his research is informed by the work of French Marxist philosopher Henri Lefebvre, who argues that the space we occupy is not a natural given, but instead a social construct based on economic systems, power structures and the class system.

Keogh is also influenced by the writing of Lynsey Hanley whose book Estates deals with the segregation often felt between social housing neighbourhoods and other more affluent urban areas.

“In Moyross, this phenomenon not only exists in the minds of the people who make up the community, but there is also a boundary wall encircling the estate to consolidate this mindset,” he claims.

“What I am speaking about is a community and they tell a story in themselves. I also felt a responsibility to undo this stigma that has been applied way before a lot of these people were even born. These are good, decent people and I have gotten to know them over the past year and I have a lot of respect for them. It’s important to give a face to a place.”

Keogh, who has a first-class honours in photography and a masters in art and research collaboration from Dún Laoghaire Institute of Art, Design and Technology, says it took time to develop a rapport with the local community after he first arrived into Moyross with his camera in March 2017.

“For years these people have been under the media spotlight – not just local but national as well – so I assumed they would be suspicious and sceptical of my motives.

“I chose to initially ignore the people, I didn’t want them to think I was another person coming in there to exploit them. I was very cautious and respectful.

“People coming to the show are expecting to see horses and burnt-out cars, but there is very strong sense of community in Moyross. People are close and they interact with each other; there’s no hiding behind walls.

“I am not being critical of the people of Moyross; I am critical of regeneration,” he adds.

A spokespeson for Limerick City and County Council says significant work has been carried out in Moyross based on the Limerick Regeneration Framework Implementation Plan adopted by the local authority in 2014. Some 46 new houses have been built and occupied, and more are being built or are planned.

“The homes are being constructed closer to retail and civic amenities, which makes better planning sense, and helps to eliminate some of the causes of isolation. It is important to contrast the Moyross pre-Regeneration and now. The place has changed a lot,” a statement says.

According to the local authority, there has been increased attendance at school, the level of serious criminality has fallen, and community engagement is rising.

Moyross Study is running as part of the PhotoIreland Festival 2018, from June 1st-24th at The Library Project, 4 Temple Bar Street, Dublin 2.