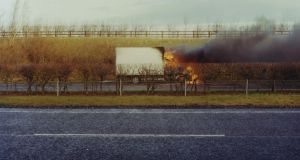 Samuel Laurence Cunnane, The Viewing Room at kerlingallery.com. The work is also reproduced in a new publication with an essay, Ambiguities, by Brian Dillon, and the transcript of a conversation between Cunnane and Dorje de Burgh

Samuel Laurence Cunnane’s photographs are analogue images printed in colour or black and white, and in a way they have much in common with film stills.

Not the kind of film stills released by the studios or distribution companies, those poised, calculated and formulaic images dissected and pastiched in the self-portraits of artist Cindy Sherman. Rather, his compositions often resemble freeze-frames or screengrabs snatched as the camera pans to catch a subject rather than when it is fixed on one: images that are abstracted and narratively obscure.

Although he has identified himself as a documentarian and acknowledges the influence of documentary film on his work, Cunnane’s photographs also suggest a relationship with European art house cinema, including but not only, French or Italian. Jean-Luc Godard and Michelangelo Antonioni both come to mind.

The notion of such a relationship is perhaps strengthened by the fact that the photographs usually cite a variety of locations far from Ireland – Cunnane has travelled a great deal. But most of the photographs that make up his current exhibition, accessible online via the Kerlin’s website, were taken in his native Co Kerry, where he is based.

Cunnane studied photography at IADT, graduating about 10 years ago. He’s passionate about analogue, but is not quite a purist or fetishist, owning up to using digital where he works with video, for both image and sound.

The Kerry of fragments and glimpses we see in his photographs is not Kerry as promoted in the concept of the Wild Atlantic Way, though it does feature aspects of the infrastructural development that forms an inescapable part of the tourist industry. They include, for example, instances and expanses of the peculiarly bland and brutal architecture both domestic and commercial, notionally functional but in fact dourly anti-human, that continues to proliferate not just in west Kerry but throughout the country.

Pebble Dash confronts us with the impassive corner of a generic industrial building. Windows slot into its grid of pebble-dash panels, but they are blanked out by closed blinds. Boarded Window is a close view of a new house, but equally severe in appearance and it seems to be abandoned.

It is important to say that Cunnane’s work is not about the destruction of the Irish rural landscape in a direct, thematic way. In a conversation with his friend and fellow photographer Dorje de Burgh, he explains that: “Part of my reasoning with making this work was that I wanted to turn my attention to the landscape I grew up in and make it my own.” That landscape includes and is to some extent characterised by “a certain vernacular architecture”. Presumably modern grotesque is the vernacular in question.

It also includes Kerry’s distinctive, subtropical flora, “the almost sinister vegetation we have down here.” The vegetation has presumably long simmered in Cunnane’s imagination, because he has been consistently drawn to intense, heightened views of vegetation.

He also comments that he is drawn to in-between spaces, the edges of towns and developments, which makes sense given his liking for images that are not easy to pin down. When he does photograph people he can be predictably oblique but also conveys an emotional intensity, generating an intimacy that again invites cinematic parallels.

Viewed sequentially, two studies of Siobhán in the back seat of a car hint at, and then more or less dispense with, narrative suggestion. There’s not so much a coolness as a neutrality to his eye. The rawness of a stark, poignant image of a dead fox is rare, probably most closely matched by his views of plants.

A photograph with a straightforward subject, such as Small Truck Burning, is a relative rarity. Even here, though, there’s a surreal, David Lynch quality to the image of the white-sided lorry burning fiercely by the side of an empty motorway.

An apparently bland, empty image like Hand Print, centred on a yucca plant in the corner of a car park in front of an industrial building (perhaps another part of the building in Pebble Dash), radiates a certain surreality and unease, casting the location as a film set, a construction. And it is a construction, a calculated invention, complete with token exotic plant. Cunnane seems drawn to its vacuity.

As far as still photography goes, one obvious connection is with the Italian Luigi Ghirri (some of whose work was exhibited at the Douglas Hyde Gallery a few years ago). Ghirri, who died in 1992, is recognised as an important 20th-century colour photographer and his work has a comparably ambiguous quality, situated somewhere between fiction and reality, slightly alienated from its world.

In his conversation with de Burgh, in the context of coronavirus and social isolation, Cunnane observes that “being disconnected from the environment and the landscape is not a new phenomenon but a result of our inability to perceive it”. It’s as if this inability to see is built into his photography. He is allergic to the habits of pictorial convention. His work is by its nature quiet, and hard to read, but it is persuasive and memorable and is likely to lead him in unpredictable directions.