Art in Focus: The Blind Piper by Joseph Patrick Haverty 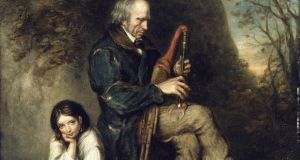 Joseph Patrick Haverty’s The Blind Piper: Reproduced as a print as The Limerick Piper, it sold widely and became well-known.

An oil painting of a street musician who played regularly in Limerick city.

It was painted in oil on canvas. The subject, uileann piper Pádraig Ó Briain (there are several variant spellings of his name on record), occupied a space on the corner of the Crescent and Hartstonge Street in Limerick and presumably Haverty noticed him there. Pipers were esteemed in Ireland and were a popular subject. Haverty had a sound instinct for what would appeal to an audience. He transposed the piper from an urban to a woodland setting, which is theatrical but effective, and the painting seems to have been known under several different titles, including The Father and Daughter (O’Brien had two daughters but opinions differ as to whether the girl depicted was one of them), The Blind Piper and The Irish Piper.

Reproduced as a print under the title The Limerick Piper, it sold widely throughout the country and became extremely well-known. Haverty made another quite different painting of the piper, now in the University of Limerick collection, but he also made copies of his own work.

To complicate things slightly: The Blind Piper was exhibited by the RHA in 1845, when it was praised in the Nation. It was perhaps this version that Sir Josslyn Gore-Booth bought and exhibited at the Cork exhibition in 1852. But there were other versions in circulation. Young Irelander William Smith O’Brien reputedly commissioned a copy from Haverty, and bequeathed it to the National Gallery of Ireland in 1864.

The annual week-long festival, a lively mix of summer school, competition and a packed programme of traditional music concerts attracts up to 500,000 people from throughout Ireland North and South, the UK and internationally. The exhibition of art and artefacts is drawn from Drogheda’s Municipal Art Collection as well as those of major public museums, including the National Gallery of Ireland and Imma. It aims to explore “the rich social, political and aesthetic contexts in which the traditional arts have been expressed”.

It is typical, though Haverty was exceptionally industrious and adept across the fields of genre scenes, big subject paintings, portraits and print-making. He was born in Galway in 1794 and was only 20 when he sent a portrait to the Hibernian Society of Artists. He set about establishing his reputation, becoming an associate of the RHA in 1823 and exhibiting at its first annual exhibition in 1826. He seems to have worked in Galway, Dublin, Limerick and London. Several engravings and lithographs from his original paintings became bestsellers.

His portrait sitters included Daniel O’Connell, writer Richard Robert Madden and Young Irelander Thomas McNevin. He made paintings of the fair at Ballinasloe, the Monster Meeting at Clifden in 1843 and other notable social and political events. He died at his home in Rathmines, Dublin, in 1864.