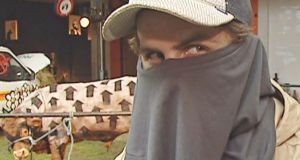 Still from a 2003 ITV interview with a man purporting to be Banksy. Photograph: ITV News/PA

A long-lost interview with a young man claiming to be Banksy, the world’s most famous anonymous street artist, has been found in a television company’s vault.

The interview was filmed before the elusive artist’s breakthrough 2003 Turf War exhibition in London and features a man whose face is partially obscured with a baseball cap and T-shirt.

It was shown on ITV London at the time but then forgotten about until the Bristol-based ITV News reporter Robert Murphy stumbled upon it when he was doing some research on Bansky.

The figure is shown stencilling a picture of a black insect on to a wall and working on a piece in which a baby is playing with alphabet building blocks that spell out: “KILL MORE.” Both pieces have long been attributed to Banksy.

The two-minute report, by the ITV News correspondent Haig Gordon, features the man speaking for 35 seconds. His eyes, eyebrows and forehead are visible. “I’m disguised because you can’t really be a graffiti writer and then go public,” he tells Gordon, who has since retired. “The two things don’t quite go together.”

The interviewee says: “It’s hard to make an entertaining picture at the best of times but at least if you have something that wanders around and licks its nose and urinates in front of you it’s going to make the picture a bit more interesting.”

Asked about spraying Designated Riot Area on Nelson’s Column, the man says: “I thought that was quite funny.”

Gordon asks: “You don’t mind if I pass your details on to the police?” He replies: “No. What details have you got?”

Murphy found the report in the ITV News archives and conceded it was impossible to say if the man was Banksy. But he said the clip showed an artist purporting to be Banksy creating art at an official Banksy exhibition.

Gordon recalled: “He was relaxed, he was laid-back, he was amiable. I quite took to him. I was dreading a pretentious arty-farty type, but he was very pleasant.” Gordon said he could not say for sure if it was the real Banksy. “But it seemed like an organised event. The press officer seemed like a normal press officer who wouldn’t be playing a trick on the media.”

Richard Jones, a director of Tangent Books, which has published several books about Banksy street art in his home city of Bristol, described the footage as “really unusual” and “very, very rare”.

Doubts will linger, however. The man featured in the ITV film does not entirely match the description the Guardian’s Simon Hattenstone gave when he interviewed the artist in 2003: “Bansky is white, 28, scruffy casual – jeans, T-shirt, a silver tooth, silver chain and silver earring. He looks like a cross between Jimmy Nail and Mike Skinner of the Streets.”

Banksy’s people were unimpressed on Thursday saying only: “No comment. We get loads of these.” – Guardian

‘The Art of War’: As relevant now as when it was written
7

Martin Hayes: ‘Retirement is a terrible disaster if it’s something you love doing’
10 The guarded words of Trevor Rees-Jones
Real news has value SUBSCRIBE