Art in Focus – A Mummers’ Banquet (detail) by John Kindness

Kindness excavates the history of hospitality at Hillsborough Castle 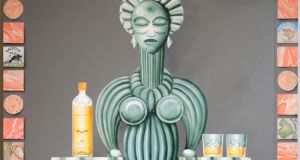 A panel from A Mummers’ Banquet by John Kindness

The work is painted on aluminium panels. Arranged in a line, they make up a 6m-long frieze of fantastical characters. Each panel is embellished with a decorative border comprising the ingredients for an Ulster fry. Historic Royal Palaces, the independent charity that looks after Hillsborough Castle, commissioned Kindness. He looked at the castle’s history of hospitality and entertaining and talked to staff at the castle, local residents and six local community groups, gathering information and stories. The groups became involved and, with writer Maeve O’Lynn and artist Hannah Shepherd, held workshops to delve into the subject.

Traditional, in rural areas, the wrenboys, elaborately costumed and with blackened faces, circulated from house to house on St Stephen’s Day, playing musical instruments and singing. In the west, they were known as mummers and attired in straw suits and hats. Kindness’s mummers are of a different order, fantasy amalgams of historic figures, artefacts and industrial products, animals and foodstuffs. As he outlines them: “If you imagine a procession of figures made up from Damask linen, a load of Lough Neagh pollan and eels, some silverware and crystal glass, stoneware pottery, Portavogie prawns, oysters, champ, a hare and a wild duck, William of Orange, James II, Benjamin Franklin, Lord Grey, Joey Dunlop, Dunlop Tyres, Cyril Lord carpet, Irish whiskey, a gun, a drum and a fishing rod, a big fish, some fish fingers and an Ulster fry. Well, there’s all that and more at A Mummer’s Banquet.”

It is typical. Kindness is known for his carefully researched, meticulously made, widely accessible works, fashioned in a wide range of sometimes unorthodox materials, which often have a humorously satirical edge. His affectionately regarded monumental public sculpture The Big Fish – or The Salmon of Knowledge – on Donegall Quay by the Lagan in Belfast, is surfaced with ceramic tiles imprinted with images and texts that tell the story of the city.

Born in Belfast, he attended art college there but became disillusioned with the fine art ethos of the time. He went on to work as a graphic designer and, through comic book narrative, found a way to address concerns and events in the world around him, using allegory and humour. That set him on a course back to fine art, but entirely on his own terms, which he has held to since. His work is mischievously inventive, highly literate and allusive, and he is exceptionally industrious.