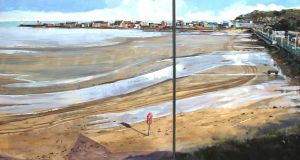 Two months on the coast oil on canvas, by Una Sealy

Submitting work for the RHA’s Annual Exhibition is a bit of a lottery. You’re agreeing to the snap decision of a panel of judges, all eight of them academicians, three female, five male. If they come down in your favour, your work is exhibited, but there is of course no guarantee it will sell or even be particularly noticed. Still, the odds are preferable to any lottery.

Going on this year’s figures, any given work had a slightly better than one in eight chance of making it into the main event. Around 1,400 artists submitted 2,476 works, of which 321 pieces made it through. That’s not the end of the story. Selected works are eligible for a growing number of awards. RHA members, associates and guests don’t run the gauntlet of the open call process, but they exhibit and add them, and the total number of works in the show exceeds 550, edging closer to 600 if you add works shown in tribute to deceased academicians.

All of which fits comfortably enough into the building, so long as you include stairwells, the lobby and any other in-between spaces. And the ingenuity of Michael Cullen and Liam Belton, who find a place for everything. Inevitably, as you make your way through this art marathon, you will come upon more than one piece that prompts the question: How on earth did that make it past the selection committee? That is a good thing. Not just because it surely reassures those whose work was not accepted, but also because such a big compendium has to be diverse, and because surprise, to the point of unease, is intrinsic to any engagement with art. In the end, you may not warm to any particular surprise, but it’s good to be challenged.

Visit the RHA and you can see close to 600 artworks by people who have worked really hard to get there. All this for free, though visitors are invited to make some contribution to the academy. As its current president Mick O’Dea spells out, although €1 million has been raised from private donors towards bank debt incurred during its major refurbishment project, €350,000 remains due in 2018. So this year the percentage commission on sales has been raised to 40 per cent, which is a sensible move especially since early indications are that sales are shaping up to be quite good, despite the subdued state of the Irish art market in recent years. Even with the outstanding bank debt, the academy has never appeared to be as well organised, lively and enterprising as it is now, which is some feat in the challenging circumstances.

As for the art: it’s a big, occasionally noisy, good-natured show. The reach is wide. Miranda Blennerhassett’s grid-patterned, site-specific, stairwell installation is probably a departure for the RHA, and a good one. It is no surprise to see a leading representational painter, Blaise Smith, elected to the academy. It is some surprise, perhaps, to see a leading artist in a decidedly non-representational tradition, Dorothy Cross, become an associate: it’s another indication of how the organisation is evolving.

Several academicians take the opportunity to showcase substantial, coherent projects. The head of the RHA School, Colin Martin, bravely puts himself in the spotlight with a very strong group of paintings, some of which form part of his project based on sites of future-orientated obsolescence, though one at least – a vinyl record production unit – has made a comeback. Abigail O’Brien’s visually sumptuous still-life photographs, close-up studies of cutlery, cooking utensils, crockery and table linen suggest an oblique approach to the highly charged issue of State hospitality or the lack of it. Her project title is Guess Who’s Coming to Dinner?

Una Sealy’s excellent, panoramic estuarine view from the vantage point of Baldoyle Library, Two Months on the Coast, shines; her Girl from the Northside is also noteworthy. In another panorama, Jim Savage’s From Errisbeg, reprises a subject but this time in the form of a painting rather than a drawing. There’s a nice dialogue between Roseanne Lynch’s exemplary shuttered window photograph and Joe Dunne’s French Window Contra Jour in tempera; incidentally his Sea and Woman is surely one of his best paintings to date. Marc Reilly’s radiant studies of horses, vegetation and light are perfectly pitched.

Any undesirable trends? A distinct move towards quasi-photographic portrait paintings in the worst sense. Hyper-real does not mean better. Why make a painting that looks like an ugly photograph?

One of the duties of the annual exhibition is to pay its respects to those who have died during the past year. The catalogue includes obituaries of associate council members including the writer Anthony Cronin, the art historian Anne Crookshank and the painter Basil Blackshaw, plus two members who were both fine artists, John Coyle and John Long.

Sad to say, two more recent deaths are not recorded in the catalogue but they are represented in the exhibition: Stephen McKenna, who was president of the academy from 2005-2009, and Barbara Warren, regarded as the last surviving link with a generation of pioneering modernist Irish women artists, exhibited at the RHA since 1950 and elected a member in 1989.