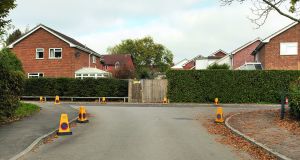 McGrath visited Salisbury, the site of the attempted assassination of Sergei and Yulia Skripal in March 2018

Dara McGrath’s project, Cleansweep, is a magnum opus. Seven years in the making, it extends well beyond the bounds of the new, handsome book published by Kehrer which does, nonetheless, beautifully encapsulate the core of his endeavour. His work falls into a genre of contemporary photography that might be termed troubled landscape. The genre consists of work that documents landscapes that explicitly or implicitly display or conceal problematic histories. Edward Burtynsky’s work, for example, reflects the human impact on the natural environment through such activities as oil extraction or quarrying. Paul Seawright’s Sectarian Murder series, on the other hand, depicts nondescript tracts of, mostly, anomalous urban spaces, each burdened with the information that it was the site of a sectarian murder during the Troubles. Chloe Dewe Mathews’s Shot at Dawn revisits the locations of first World War executions of those convicted of desertion.

McGrath’s landscapes fit mostly into the latter category, but often the sites do convey a certain unease apart altogether from their dark histories: they just don’t seem quite natural, even when you can’t put your finger on what is wrong. They are all in the UK. And all incorporate locations used in the research, development, manufacture and storage of chemical and biological weapons. His point of departure was a piece in the Guardian in 2011, reporting on Project Cleansweep, a ministry of defence programme aiming to confirm the environmental cleanliness of locations used for chemical and biological weapons research from the first World War to the cold war. He thought it might be interesting to go and visit these places, and see how they appear now. He soon realised there were relevant sites beyond those specified.

He’s visited 92 locations in all, including a relatively recent addition to the list, Salisbury, the site of the attempted assassination of Sergei and Yulia Skripal in March 2018 with the nerve agent Novichok by Russian agents who, when they were rumbled, protested that they were only there to visit the world-famous cathedral spire. As it happens, though, McGrath had previously been to Salisbury, in relation to a much earlier event. Between 1949 and 1953, chemical weapons researchers engaged in 22 night-time experiments to track the dispersal of biological weapons in built-up areas. Their cover story was that they were researching weather and pollution levels. Such duplicity became alarmingly common as research extended countrywide.

As Ulf Schmidt writes in a richly informative contextual piece included in the book, modern warfare was changed, acquiring a whole new dimension of horror when, at a village near Ypres in Belgium in April 1915, the German army released many tons of pressurised liquid chlorine along a four-mile front. In the short term, they condemned many – the figures are not altogether clear – people to a painful death. They also initiated a chemical arms race which quickly drew in all the industrialised combatants. In the UK, it led to the establishment of Porton Down, which became synonymous with secret weapons research. Soon it incorporated a vast network of installations and facilities occupying in excess of 6,000 acres (2,428 hectares) in Wiltshire. In time biological weapons came into play and, as with chemical weapons, drew vociferous opposition. Schmidt’s piece is drawn from his 2015 book Secret Science: A Century of Human Experiments and Poison Warfare. The title is indicative of something that became disturbingly symptomatic of all kinds of weapons research and development: treating the general population, human and animal, as hapless experimental subjects.

Virtually every location visited and depicted by McGrath generates a particular, disturbing and in ways surreal story, often by virtue of the subterfuge involved, as when officials pretend to be monitoring the weather.

Some examples are especially dispiriting, as is the case with Gruinard Island on the northwest coast of Scotland, where a specially imported population of sheep was bombarded with anthrax spores. Porton Down took over Gruinard, which was and should be an idyllic place, in 1942. It was declared free of contamination during 1990. Much agitation and protest surely contributed to its recovery.

Mind you, it remains understandably unoccupied. There is a grim predictability to the secrecy surrounding the use of dibenzoxazepine or CR gas, a tear gas 10 times more powerful than CS gas, to quell disturbances at the Long Kesh/Maze prison in Northern Ireland. Exposure to dibenzoxazepine induces an unbearably painful reaction. “I felt like I was on fire,” one victim reported. Perhaps those who decided on its illegal use justified it to themselves by the fact that Northern Ireland was in a state of conflict. Even such an inadmissible excuse could not apply to another blatant disregard for the lives of UK citizens. From 1963 to 1975, the Lyme Bay Trials on the south Dorset coast. They involved the densely monitored release of four types of live and dead bacteria, and the carcinogenic zinc cadmium sulphide on the coast and inland areas. Clusters of health abnormalities downwind attracted media coverage, but the authorities were unapologetic. Such trials, they said, could not be ruled out in the future.

Most of McGrath’s photographs are beautiful, and a little strange, charged with some slight incongruity, an aspect that triggers an unspecified but unmistakable unease. Extended captions elaborate on what we are looking at, and several sections include additional documentary material and explanation.

But, as Schmidt notes, the subject does not make for neat narrative structure. It’s never a case of mistakes being made and rectified, rather a series of glimpses into an inherently troubling reality. Decontamination will never be complete and, worse, contamination will be perpetuated in whatever ways human ingenuity can devise.

Project Cleansweep by Dara McGrath (with texts by Rachel Andrews, Robert MacFarlane and Ulf Schmidt) is published by Kehrer