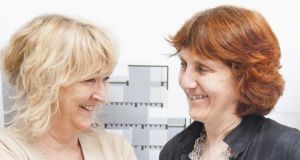 Hot on the heels of Britain’s Royal Gold Medal, Yvonne Farrell and Shelley McNamara, founders and principals of the Dublin-based Grafton Architects, have won the 2020 Pritzker prize, the first two women to share what is regarded internationally as architecture’s highest honour.

The judges’ citation described Farrell and McNamara as “pioneers in a field that has traditionally been and still is a male-dominated profession; they are also beacons to others as they forge their exemplary professional path”.

The Pritzker Architecture Prize was inaugurated in 1979 by the Hyatt Foundation. Its purpose is to honour annually a living architect or architects whose work demonstrates a combination of talent, vision and commitment, making a significant contribution to humanity and the built environment. The only other Irish winner of the prize was the expatriate architect Kevin Roche (in 1982) for his body of work, largely in the United States.

The selection of Farrell and McNamara for this year’s prize was announced in Chicago today by Tom Pritzker, chairman of the Hyatt Foundation. He hailed the “incredible strength” of their architecture, its responsiveness to local context, the honesty of Grafton’s work and its sense of responsibility in this era of climate change.

“Architecture could be described as one of the most complex and important cultural activities on the planet,” Farrell said after hearing that they had been named as recipients of this year’s award. “To be an architect is an enormous privilege . To win this prize is a wonderful endorsement of our belief in architecture. It is also a wonderful recognition of the ambition and vision of the clients who commissioned us.”

“Within the ethos of a practice such as ours,” McNamara said, “we have so often struggled to find space for the implementation of such values as humanism, craft, generosity and cultural connection with each place and context within which we work. It is therefore extremely gratifying that this recognition is bestowed upon us and our practice and upon the body of work we have managed to produce.”

In practice together since 1978, Farrell and McNamara first hit international headlines in 2008 when they won the inaugural World Building of the Year award for Grafton’s Bocconi University faculty building in Milan and went on to act as joint curators of the 2018 Venice Architecture Biennale. Their current projects include the redevelopment (with OMP Architects) of the ESB’s headquarters on Fitzwilliam Street, in Dublin.

According to the Pritzker jury, Farrell and McNamara have created spaces that are “at once respectful and new, honouring history while demonstrating a mastery of the urban environment and craft of construction. Balancing strength and delicacy, and upholding a reverence of site-specific contexts, their academic, civic and cultural institutions, as well as housing developments, result in modern and impactful works that never repeat or imitate, but are decidedly of their own architectural voice.

“They have consistently and unhesitatingly pursued the highest quality of architecture for the specific location in which it was to be built, the functions it would house and especially for the people who would inhabit and use their buildings and spaces. They have an oeuvre that includes numerous educational buildings, housing and cultural and civic institutions . Pioneers in a field that has traditionally been and still is a male-dominated profession, they are also beacons to others as they forge their exemplary professional path.

“For their integrity in their approach to both their buildings, as well as the way they conduct their practice, their belief in collaboration, their generosity towards their colleagues... their unceasing commitment to excellence in architecture, their responsible attitude toward the environment, their ability to be cosmopolitan while embracing the uniqueness of each place in which they work, for all these reasons and more, Yvonne Farrell and Shelley McNamara are awarded the 2020 Pritzker Architecture Prize.

“Their native Ireland, an island replete with mountains and cliffs, informs their acute sensitivities to geography, changing climates and nature in each of their sites. Their buildings consistently remain purposefully rich, yet modest, enhancing cities and lending to sustainability while responding to local needs,” the jury said, citing Grafton’s Utec campus in Lima, Peru, “a vertical and cascading building responding to both site and climatic needs, cooled by breezes from the Pacific Ocean.

Referring to the Department of Finance’s offices on Merrion Row, in Dublin, completed in 2009, the jury said the selection of local limestone used in thick panels gave strength to the building, which overlooks the Huguenot Cemetery. Another major project in Dublin, a new central library on the north side of Parnell Square, has yet to get off the ground because of funding difficulties but is still expected to proceed as a key element in the “cultural quarter” planned for the area.

Other projects include a new school of economics for the University of Toulouse, in southwest France. Also under construction is a new faculty building for the London School of Economics, rising up behind the Old Curiosity Shop featured in the work of Charles Dickens, and located directly opposite the LSE’s Saw Swee Hock Student Centre, which was designed by the multiple award-winning Dublin-based architects O’Donnell + Tuomey.

Farrell and McNamara have “mastered proportion to maintain a human scale and achieve intimate environments within tall and vast buildings”, according to the Pritzker jury chairman, the US Supreme Court justice Stephen Breyer. “They have tried, with considerable success, to help us all overcome what is likely to evermore become a serious human problem – namely, how do we build housing and workplaces in a world with over half of its population dwelling in urban environments, many of whom cannot afford luxury?”

Farrell and McNamara are the 47th and 48th Pritzker laureates, and the first based in Ireland . Delighted with their win, McNamara describes architecture as a “framework for human life. It anchors us and connects us to the world in a way which possibly no other space-making discipline can”. For Farrell, “a real belief that architecture matters” is at the core of Grafton’s practice. “ It is a cultural spatial phenomenon that people invent.”