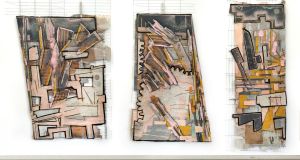 IN PURSUIT OF THE BROCKEN SPECTRE – NEIL CARROLL

The Brocken is a peak in the Harz mountains in Germany. A mist-shrouded summit, it lends its name to an optical effect experienced on occasion by climbers and hillwalkers. Perched above mist and cloud, a look back, with the sun behind you, can reconfigure your shadow as a vague presence in a halo of light. So much so that the phenomenon is said to be responsible for many accounts by lone climbers of being followed by a mysterious creature. The title of Neil Carroll’s fine exhibition suggests he is on the trail of that nebulous creature, the spectre, or perhaps, figurtaively speaking, in search of something perpetually elusive and intangible.

That would accord with Lacan’s intriguing idea that the painter is always after what is just beyond the bounds of visibility. Yet Carroll’s “built paintings” are firmly grounded in the tangibly real. He employs a range of building and construction trade materials: household paint, plaster and plasterboard, several kinds of paper and card, wood, wire mesh, adhesive tape, galvanised nuts and bolts and more.

So he’s making something in a direct sense, but also unmaking. He often peels back the protective layer of paper to reveal the dry plaster filling, for example; time and again he interrupts the flat surface he is notionally constructing to reveal a supporting framework beneath, laying bare the bones and deliberately undermining any illusion of a representational image.

Usually each piece has the busy, functional, messy air of a work in progress, a building site, an effect enhanced by rough textures and jagged, angular rhythms. All entirely effective, producing memorable results. But the artist also reaches further, perhaps hoping for a glimpse of the spectre (some of his titles expressly pursue the mountainous reference).

Despite the continual reminders of fabrication, improvisation and matter-of-factness, suddenly a work will, so to speak, take flight, generating a space of its own. Not a space as conveyed by conventional representational perspective, more a field, a region, atmospherically alive, that is somehow conjured out of the mundane component parts. The spectre?

Carroll’s work is ambitious in this way, but also in terms of its scale. He takes on monumentally large compositions with quiet conviction. The scale is part of what he is doing, not a straining for effect. A couple of other artists come to mind in relation to his exhibition, not so much as influences or exemplars but as individuals working in parallel ways in the same general area. One is Helen O’Leary, whose wonderful constructed paintings have opened up for her a world of inventive possibility. The other is Paul Mosse, whose inimitable, process-driven painting-sculptures are both challenging and profound.

Laura Fitzgerald’s work, which is satirical in tone, is conceived and delivered with a light touch. Yet at its heart is a genuine, deep unease, perhaps even anxiety. It all probably has its starting point with a consideration of being an artist at this point in the 21st century, with, that is to say, Fitzgerald’s own situation. She has addressed the nature of the art world as encountered by a moderately idealistic young practitioner and it’s fair to say that the scope of her enquiries, as evidenced in Headcase, has widened to incorporate the general cultural and socio-economic circumstances that frame contemporary life.

She is from a rural, farming background in Co Kerry, and the pragmatism of rural life, with the opportunity it presents of an outside, independent viewpoint has been important to her, it has perhaps literally grounded her. An oblique, fragmentary narrative runs through Headcase. It begins with the “research, production, realisation and installation of an art exhibition”, a process that drives one to “go a bit mental”. The essence of the process lies in devising a conceptual strategy that comfortably accommodates all the stages and participants involved along the way, and is a comfortable fit with the prevailing critical and commercial orthodoxy. Hence her drawings on “very expensive paper”, for example, to reassure the doubters.

Here, Fitzgerald seems to feel that the most important consideration is rhetoric, and rhetoric retains its vital role when she looks further afield in considering contemporary preoccupations with, say, wellness and self-improvement, or environmentalism, or ethical behaviour.

One big problem is that any and all of these things, valid and worthy as they might intrinsically be, are inescapably enacted within and shaped by the commodified environment of the marketplace.

Late capitalism, an argument goes, entails a phase of rampant commodification, as business finds ways to wrest profit from more and more areas of ordinary life and behaviour. Fitzgerald proposes beehive huts for recuperative meditation (with wifi). In her fable, she imagines a cohort of late capitalist warriors, sharp businessmen, abruptly ousted into the wilds of rural Ireland without a phone-charger to be had. In an unconnected world, bereft of Netflix and every other online service, they disperse into small communities, “raising bees and growing spuds . . . melting Rolexes into tiny bells, meditating in old ring forts . . . not improving at all.” But strangely happy.