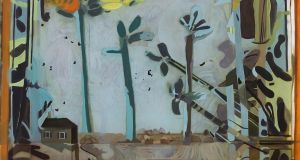 Generally, apart from anything else, Sonia Shiel’s exhibitions have been notable for the conspicuous investment of energy her work entails. The limitless generosity of her commitment is almost disconcerting. Conventionally gifted, the evidence is that she has never regarded facility as being sufficient in itself, only as a means to an end. What that end might be is a more difficult question, probably even for her.

Considering a sequence of her projects and her current show, it seems possible that the end, or core, or fundamental object of enquiry, might be the idea of authenticity. A longing for it, a distrust of it, a fascination with it, always attended by a niggling doubt about its very possibility.

Shiel’s paintings have variously blossomed into constructed, painted sculptures and sets, as in film or theatre sets. She’s elaborated on the development with a script and performances. Prior to that she embraced several kinds of popular narrative forms in her installations. Or allusions to forms, such as, if memory serves, fables, fairy stories, westerns. Her Rectangle, a written thing, framed a quest for artistic authenticity in an overtly constructed, theatrical setting.

The implicit suggestion, or assumption, that to be an artist entails taking on a persona and performing a role, overwrites a more ominous suggestion that might be phrased this way: to be a social being in the first place means performing a role. Both notions are clearly true, relatively speaking, and only become problematic when the degree of performance strains the bond with what one actually is. But the anxiety of Shiel’s piece, and anxiety is always a factor in her work, is perhaps rooted in the suspicion that there is no authentic centre in art or in life.

For the work in How The Oyster Makes The Pearl, eight oil paintings and two small sculptural pieces incorporating painted elements, she has allowed herself the luxury of facility. If that sounds indulgent, or self-indulgent, that would be misleading. She is never complacent about her skill, always uneasy. The paintings are very well made but are not at all about neat resolutions. On the contrary, in them she sets about dismantling the representational narratives she is in the process of constructing.

Or, more accurately perhaps, dismantling the pictorial language even as she is employing it. This is not cubism by another name. The accompanying press release alludes to her habitual anthropomorphic approach to the notionally inanimate elements of a representational image. Not only fragmenting or animating the scenery but lending it autonomous agency. This moves up a gear in these new works. It’s as if the artist is a ringmaster in a suddenly anarchic circus, with the performers running amok.

The fact that the constituent parts of each painting are drifting from their ostensible functions – with indications of light itself fragmenting and dispersing – lends the work a visual dynamism. Not by chance, of course, but by virtue of Shiel’s skill. Her sense of colour, tone and form is distinctive and utterly reliable. As regards that elusive authenticity, perhaps there is a more optimistic note here. How does the oyster make the pearl? It starts with something intrusive, even inauthentic, a piece of grit. An unease.

Sonia Shiel: How The Oyster Makes The Pearl is at ​​​the Kevin Kavanagh Gallery, Chancery Lane, Dublin, until May 4th. Kevinkavanagh.ie

Given his loyal following, it is amazing that this exhibition is Martin Mooney’s first in Dublin in 12 years. But it is a very substantial show of more than 50 pieces. Some of them, it is true, are small works, plein air studies or compact floral still lifes, but not only are most pieces substantially larger, several landscape triptychs are seriously large panoramas. Also, it marks a significant development in Mooney’s approach.

The clue to that development is in the plein air tag. Amid the geographical diversity, what is consistent is the artist’s lively, increasingly adventurous engagement with both the landscape image and the paint surface. The larger still lifes, much larger-than-life floral paintings, arguably detract from the larger landscapes by disrupting the sense of scale. Also, while the small floral studies are excellent, the landscapes, small and large, are generally in a different league.

From early on there was a retrospective quality to Mooney’s paintings. Born in Belfast, he first studied art there, then moved on to Brighton and finally to the Slade in London, in the 1980s. There was something almost willfully anachronistic in so clearly embracing classical representation in 1980s London, but given his abilities Mooney presumably had moral support, including that of a timeless champion of representational painting, his esteemed teacher Euan Uglow. Being praised by the reactionary critic Brian Sewell had to be something of a mixed blessing, but Mooney found an enthusiastic audience for his virtuosic still life and landscape – often cityscape – paintings.

However contemporary the subject, he tended to envelope it in a warm retrospective glow, in long shot, which may have been part of the appeal for some of the work’s admirers. For his still-life paintings, he favoured linear arrangements of glazed, decorated jars. His technical proficiency was undoubted, and admired, but one felt he was not quite allowing himself scope.

A shift was noticeable by the time of his last Dublin show, and in the interim that impetus towards change has clearly transformed his approach. One result is his interest in the sky, previously a rather desultory backdrop. Now the skies are central and intensely alive, closely worked arrangements of blocks of colour, flushes of pinks, violets, mauves, rust reds and greens manifesting amid layered whites, greys and muted blues, in a way that, in terms of Mooney’s early work, verges on abstraction. One wonders what his more conservative admirers will make of all this, but the paintings are all the better for it.

Martin Mooney: At One With Expression is at ​​​ Sol Art Gallery, The Times Building, D’Olier St, Dublin, until April 25th. solart.ie