Art in Focus: The Pit and the Pendulum – Harry Clarke 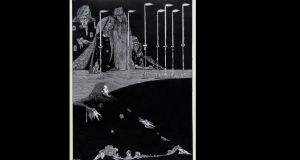 Harry Clarke, I saw them fashion the syllables of my name, The Pit and the Pendulum (detail), c 1919 (Edited version). Crawford Art Gallery

The Pit and the Pendulum is an original illustration by Harry Clarke (1889-1931).

The Pit and the Pendulum is one of the pen and ink illustrations Harry Clarke made for Edgar Allen Poe’s collection of stories, Tales of Mystery and Imagination, in an edition published in 1919 by George G Harrap, London. Clarke’s dark, rather morbid symbolist imagery – The Bookman described the illustrations as “admirable and terrible”, in the sense of terrifying – is richly imagined, intricately worked and highly detailed. While clearly related to the work of Aubrey Beardsley, his extremely stylised vision is unmistakably his own. A follow-up 1923 edition included eight colour plates. It sold so well it was in its third printing by 1928.

It is included in Mystery and Imagination: Harry Clarke (Work by Harry Clarke and others. Crawford Art Gallery, Emmett Place, Cork, until January 19th, crawfordartgallery.ie). Following on from last winter’s extremely well attended show of Clarke’s watercolours, Dreaming in Blue, this exhibition features his ink drawings and watercolours made as illustrations for Poe’s Tales of Mystery and Imagination and John Keats’s Eve of St Agnes. Presented in context with pieces by Margaret Clarke, Seán Keating and William Orpen.

It is typical. Clarke is probably best known now for his stained glass but, as his friend Lennox Robinson wrote following his death: “Ireland has lost her greatest designer in stained glass, and her greatest black-and-white artist.” Clarke’s book illustrations had proved enormously successful. Besides producing illustrations and designs for stained glass, either of which would have been a full-time occupation, until illness prevented him – and he was dogged by ill-health throughout his tragically short life – he ran the stained glass workshop established by his father as part of his church decorating business. While he was at the Dublin Metropolitan School of Art, Clarke met and eventually married a fellow student and fine painter, Margaret Crilly, and in time she and his brother Walter took on much of the burden of the workshop.

Despite an extraordinary level of productivity, Clarke did nothing lightly. He invested prodigious energy in every project and drew on an extensive range of sources and influences. Éimear O’Connor has written about the way that, while he was very knowledgeable about Irish literature and tradition, he also looked much further afield and was as deeply involved with a complex of European and Eastern sources. Because he did not fit into any readily identifiable art historical category, he was for many years underestimated, with historian Nicola Gordon Bowe being the key figure in rediscovering his significance. The layers of detail that are embedded in his imagery can seem limitless. It is hardly surprising that his work, whether in stained glass or illustration, continues to throw up surprises and revelations.