Maurizio Cattelan’s installation was peeled and devoured by another artist 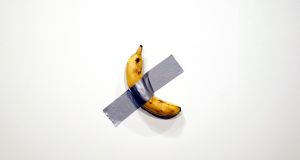 In plain sight of art aficionados and influencers, a person removed a $120,000 (€108,000) banana from an Art Basel exhibition in Miami Beach, Florida, peeled it and then ate it.

It happened on the second-to-last day of the art show, where much fuss and head scratching this week has been over a solitary banana – an overripe one – duct-taped to a wall. Three buyers paid between $120,000 and $150,000 for this week for limited-edition pieces featuring a single banana, created by artist Maurizio Cattelan and titled “Comedian.” Each came with a certificate of authenticity and replacement instructions, which perhaps should have included a disclaimer: for display only.

This happened and here's the video: someone ripped the Maurizio Cattelan banana off the wall at @ArtBasel and ATE IT 🍌 pic.twitter.com/JOL41jLoeY

Shortly before 2pm on Saturday, a New York City-based performance artist, David Datuna, peeled the taped banana from the wall and devoured it, an Instagram video posted by Mr Datuna showed. He grinned and raised the half-eaten banana as if making a toast. Another video posted on Twitter showed Mr Datuna appearing to be escorted out of the Galerie Perrotin space as bemused and stupefied art patrons watched. But a spokeswoman for Galerie Perrotin, which represents Mr Cattelan, said in an interview Saturday that the gallery was not taking any action against Mr Datuna. “It’s all in good spirits,” the spokeswoman said. “Perrotin is not pressing any legal charges.”

Gallery officials replaced the banana with another one, saying that the artwork was not destroyed and that the banana was simply an “idea.”Mr Datuna poked fun at the episode in an Instagram post he titled “Hungry Artist,” writing: “Art performance by me. I love Maurizio Cattelan artwork and I really love this installation. It’s very delicious.” Mr Datuna and Mr Cattelan did not immediately respond to requests for comment Saturday. This was not the first caper involving Mr Cattelan’s artwork. In September, an 18-karat-gold toilet titled “America” was stolen from an art exhibition at Britain’s Blenheim Palace, the birthplace of Winston Churchill. The episode recalled the self-destruction of a $1.4 million painting by British street artist Banksy at Sotheby’s in London in 2018. The banana invited comparisons with Marcel Duchamp’s urinal and Jeff Koons’ vacuum cleaners, with some questioning whether it was really art.

A spokesman for the Miami Beach Police Department, Ernesto Rodriguez, said there were no arrests or interactions with the police. He referred further questions to Art Basel, which did not immediately respond to a request for comment. – New York Times