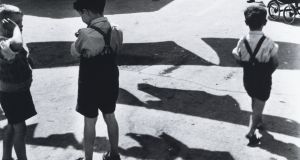 What is it? A photograph by the artist Nevill Johnson.

How was it done? In the early 1950s, with the benefit of a modest Arts Council grant, Johnson bought a Leica, the street photographers’ camera of choice, with the aim of photographing the city he loved. He set about walking the streets systematically, often in the company of Anne Yeats. The result was an exceptional photographic record of Dublin and its inhabitants before successive waves of modernisation changed things forever. The most important thing about Johnson’s Dublin photographs is their ordinariness. He had great innate skill as a picture-maker, but his aim was not to pictorialise or idealise the city or its people, but rather to convey the grain of everyday life and character. He did that brilliantly, and there is often a dreamlike quality to his views of a quieter, less busy, less densely populated place. Decades passed before his work was gathered and published as The People’s City.

Where can I see it? It is included in View of Ireland: Collecting Photography (Room 31, the Hugh Lane Room, National Gallery of Ireland, Merrion Sq West, Dublin, until February 2nd, nationalgallery.ie), the first ever photographic exhibition in the National Gallery, curated by Anne Hodge and Sarah McAuliffe. The show highlights newly-acquired works, including 20 of Johnson’s Dublin photographs, from the gallery’s photographic collection. More than 100 recent acquisitions include daguerreotypes and albumen, platinum and silver gelatin prints spanning the history of photography. Besides Johnson, Inge Morath, Jane Bown, Erich Hartman, Amelia Stein and Eamonn Doyle number among the photographers.

Is it a typical work by the artist? No. Johnson was primarily a painter, but also a very good photographer and writer (as in his memoir, The Other Side of Six). After his Dublin project, he never seemed to feel the need to pursue photography seriously again. He was an independent-minded thinker with a stubborn streak. Born in Derbyshire in 1911, he surprised himself by declining to join the family business – cotton trading – and became instead an industrial apprentice. Sent to Belfast in 1934, he happened into another apprenticeship, with the painter John Luke. In time, gallery owner Victor Waddington invited him to exhibit, prompting a move to Dublin, which he loved. There he gravitated towards the writers and artists of Baggotonia. Surrealism, albeit with a consciously allegorical slant, dominated his painting for some time, though the influence of Cubism from the mid-1940s became increasingly important, and he produced a great deal of very fine work. After a decade in Dublin, however, and somewhat dispirited, he moved back to England and was based there for the rest of his life. He died in 1999. While he produced some of his best paintings after his move to England, he was generally under-rated (apart from by a small number of admirers, including Eoin O’Brien and Dickon Hall).

Tempo of change at NCH set to increase
10