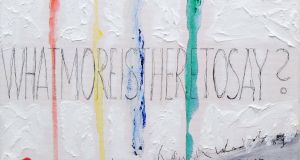 Detail from Man is in love and loves what vanishes, by Veronica Bolay

Bolay has made a painting which seems loosely based on the form of a book jacket, using acrylic paint, pencil and ink. The acrylic chiefly provides a white textured ground into which coloured inks bleed. The text is from WB Yeats’s poem Nineteen Hundred and Nineteen, which was included in his collection The Tower in 1928, though the poem was written in 1919, first published in the Dial in 1921 and then in the London Mercury, under the title Thoughts upon the Present State of the World. Yeats clearly views the present state of the world with some sadness. He is disappointed, disenchanted, even bitter. The tone is set in the first line: “Many ingenious lovely things are gone . . .”

He considers Europe after a catastrophic and pointless conflict, but also the volatile state of affairs closer to home, with the Irish question unresolved and the War of Independence opening a new chapter of violence:
“. . . a drunken soldiery
Can leave the mother, murdered at her door,
To crawl in her own blood, and go scot-free.”
Bolay’s quotations opt for his more general statement of the human condition. And she offers a more optimistic note than Yeats. Having suggested that “we dreamed to mend”, he concludes that those dreams were in vain. She leaves the question open.

The painting is included in Nineteen Hundred and Nineteen at the Hamilton Gallery, Castle St, Sligo, and the Hyde Bridge Gallery, Sligo (until August 7th). It coincides with the Yeats Summer School and the Tread Softly Festival. The title is taken from the poem. The work will then go on view at the Irish Consulate in New York in September, and further venues may follow.

It is the fifth annual invited artists exhibition organised by the Hamilton Gallery and includes 130 works, to a uniform size and format, by artists invited to respond to the poem Nineteen Hundred and Nineteen. The choice of the poem draws attention to the fact that 100 years on, Ireland is facing another period of unease and uncertainty.

It is not quite typical. It’s hard to think of another artist so committed to visualising the invisible and intangible. While you could describe Bolay as a landscape painter, her paintings are often a matter of nuance, atmosphere, a breath of air or a ray of light flowing or falling across the landscape. The scale might vary from the close, domestic and intimate to broad sweeps of land, but Bolay’s close attentiveness to the picture surface is a constant.

She was born in Hamburg. After studying art, costume design and group therapy she moved to Ireland in 1971, and lives in rural Co Mayo. As she aptly put it in 1997, she tries to paint “the half-real shapes and sensations at the edges of awareness . . . I am drawn towards the barely perceptible, the nuance and ephemera. I hope to celebrate the insubstantial components that for me intensify the experience of living.”