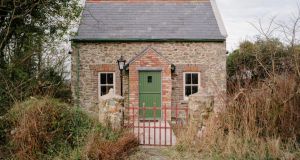 An image from ‘Labourers’ Cottages of County Wexford’, at the Irish Architectural Archive

Margo Banks’s precisely observed, dynamic, mixed media depictions of animals have tremendous vitality. As she puts it, she sees wild creatures as disinterested in our world: “They enjoy an autonomy and a lucid sense of self that is beyond our appreciation.” She likes that self-confident otherness, their certainty that they are in their own “sovereign realms”.

Simon Bates has been documenting labourers’ cottages since 2016. Originally built between the 1890s and the 1930s, they are plain, sturdy, classically proportioned dwellings. While now one can always make out the basic structure, over the years the cottages have been variously embellished, amended and extended by their owners. Also showing at the Irish Architectural Archive, until August 30th, is A Visual Window to an Ecclesiastical World, an exhibition of Church of Ireland architectural drawings.

A retrospective of the work of the Cork-born, London-based photographer David Magee. He regards his subjects not so much as places, locations, but as the feelings that imbue the places. “I aim to portray not just what exists, but what is not obvious; that imperceptible element …” A limited edition book, bound in handmade Japanese paper, accompanies the show.

“An Anthology” is how Helen Gaynor subtitles this body of work. She also writes poetry, and does not distinguish between the acts of writing and painting, so the term anthology makes sense. She also notes that “painting can be autobiographical even when it doesn’t mimic reality”. Each “visual poem” for her is an exploration and a process of discovery, connected at a deep level regardless of surface differences.