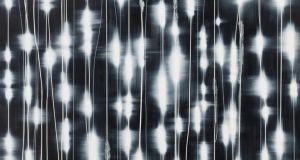 What is it?
White Light (Dual Dimension) is a painting by Mark Francis.

How was it done?
Francis uses conventional media, like oil and acrylic, but usually flatly applied, without a hint of expressiveness. In fact his images have a distinctly photographic quality, all the more so when they are characteristically smeared, so that the edges of objects are rendered uncertain and shaky, an effect most famously employed by Gerhard Richter. The images come across as cool, dispassionate documentations rather than artful inventions. He has employed colour, lavishly and to great effect, but, as in his most recent work, he seems to prefer monochromatic compositions, and a certain austerity. Although he avoids expressive gesture, a certain ominous melancholy is evident.

Where can I see it?
Francis’s exhibition, White Light, is at the Kerlin Gallery, just off South Anne Street in Dublin 2, until March 2nd.

Is it a typical work by the artist?
It is typical. With exceptional focus, Francis has followed a consistent line of development throughout his career. Although always open to change, he has never had to abandon or drastically alter his basic visual grammar since reaching a stage of individual artistic maturity, around the mid-1990s, with another major consolidation of his approach about 10 years later. His work is for the most part readily identifiable, but without ever being dully formulaic. Rather, his unmistakable lively engagement invests each piece with edgy nervous energy.

Born in Newtownards, in Co Down, he attended art school in London, first at St Martins, followed by an MA at Chelsea. He is one of the YBA generation whose work was collected by Charles Saatchi, and he was included in the celebrated and controversial exhibition Sensation: Young British Artists from the Saatchi Collection, at the Royal Academy of Arts in London and other international venues.

His breakthrough was to fix his interest on the world beyond the limits of conventional vision, from the microscopically tiny to the unimaginably large and distant reaches of outer space. Initially he turned to microbiological photographs of organic forms and materials – blood, sperm, bacteria – in which the individual components were amassed in orderly arrays or amorphous clusters. There is a lurking unease to these images, which seem open to ominous pathological interpretation. At the other extreme, he has looked to the data feeds of radio telescopes, streams of abstract information that also harbour a degree of latent menace. Perhaps the common ground is that both realms appear equally indifferent to and remote from human priorities and concerns.

“As a starting point,” Francis notes, “I visualise the universe being made up of a loosely structured grid where order and chaos can reside.” The grid, with its promise of order – or at least measurement – is generally there in his images, implicitly or explicitly. The work in White Light looks to the wider, universal picture, but the underlying principle of organisation is a constant, as is a level of unease.