Why Rock Against Homelessness matters

Of Ireland’s more than 7,000 homeless people about one-third are children 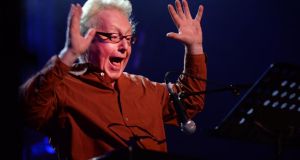 Rock Against Homelessness takes place in the Olympia Theatre on Friday, April 7th, and will feature Finbar Furey, Paul Brady, Delorentos, The Blizzards, Paul Cleary, Ham Sandwich, Ivy Nations, August Wells, Al Porter and Katherine Lynch. Danny Bracken, the formerly homeless subject of another interview in this newspaper, will also perform alongside Paul Brady and Dave Fleming. The gig was organised with the help of Independent News and Media’s showbiz writer Barry Egan and all the money raised will go to Focus Ireland, a charity which is working to end homelessness.

According to the most recent figures there are 7,167 homeless people in the state, of which 2,407 are children. In January a child became homeless every five hours, according to Focus Ireland. Many homeless people are accommodated in unsuitable hotels and hostels. Others sleep in doorways and tents. It’s not unusual any more to see makeshift shelters around the city of Dublin.

Newer initiatives include Inner City Helping the Homeless, which was set up in 2013 by concerned volunteers and also provides outreach services to people sleeping rough around Dublin.

In December a group of concerned citizens including musician Glen Hansard and film-maker Jim Sheridan occupied Apollo House – a vacant Nama-managed office block in Dublin city centre – and accommodated homeless people there for 28 days until they were forced to leave by court order. Brendan Ogle, a cofounder of the group, hopes to galvanise this into a mass movement like the Right2Water campaign, one that is compassionate towards the homeless and angry at a Government that seems to put the needs of property investors above them.

It’s clear that Irish people care about their homeless neighbours. As Bracken tells me, “You never go hungry in Dublin. There are a lot of good people doing their best to help with food and dry, clean clothes.” But, as he also points out, what homeless people need above all else are homes.

In the Western world, many governments had spent the previous decades slowly getting out of the property business in the belief that housing was best provided by the private sector. Left-wing voices questioned the idea of leaving the most vulnerable people in society to the whims of boom-bust cycles and potentially predatory landlords, but the creation of social housing stalled nonetheless.

Last July when there were 6,525 homeless people in the country, Minister for Housing Simon Coveney published Rebuilding Ireland: An Action Plan for Housing and Homelessness. It looks promising but homelessness activists have been here before. In 2014 the then minister for housing Jan O’Sullivan published a plan to end homelessness which said that would be achieved by 2016. This was followed shortly afterwards by Alan Kelly’s document, Social Housing 2020.

Under Coveney’s plan €5 billion is to be spent on social housing. It promises to build 47,000 units in five years, an end to hotel accommodation for homeless families by July – there are 1,172 families living in emergency accommodation – and a general increase in building until 25,000 homes , not just social housing, are built each year. To put this into perspective, Dublin City Council built 40 new homes last year.

Time will tell if this addresses the crisis in a meaningful way – some commentators think these numbers are insufficient – but Danny Bracken, for one, is optimistic that homelessness is a problem Ireland can fix. “We have a great country,” he says. “There are fabulous people here who want to help and when I get back on my feet I want to help too.”