Open House Dublin 2018: Everything you need to know 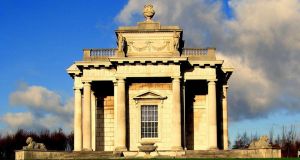 Open House Dublin, the annual architectural showcase, starts today and runs all weekend. We’ll all get to peek behind the doors of buildings, private and public, that are usually off limits, or get an insight we would normally miss.

From the newly refurbished Goethe-Institut to Kevin Street Garda station, via civic and social buildings, follies, theatres, apartments and houses both great and small, historic and spanking new, it’s a brilliant event, a couple of days when we can satisfy our nosiness – sorry, curiosity – about what goes on inside some of the city’s most intriguing buildings. Its expert tour guides, plus the fact that it’s all free, only add to the appeal.

This year’s programme – the biggest yet, expected to attract more than 30,000 visits – includes 110 building tours and 61 other events on land and water. For the first time it features a building for every decade since 1700, creating an architectural and social timeline. There are also Open House Junior events, tailored to children and families, including workshops and self-guided “architreks” and “parkitreks” around Dublin neighbourhoods and parks.

The full programme is on www.openhousedublin.com, where you can download the accompanying map. You can also pick up a printed map from Dublin city libraries and from the Irish Architecture Foundation (which founded the event in 2006) at 15 Bachelors Walk, Dublin 1. The foundation will have updates on Facebook, Instagram and Twitter, using the hashtag #OpenHouseDublin.

Not all houses and venues are open every day, so double-check the website before setting out; also, some venues are ticketed by lottery, which is closed now. (Get in early next year.) Not to worry: there’s still lots to see and do. To get you started, we’ve put together a selection of events worth checking out.

Four Courts Inns Quay, Dublin 7 A Dublin landmark, designed by Thomas Cooley and James Gandon in the late 18th century. Tours will include the Round Hall and Supreme Court.

Kevin Street Garda station 41 Upper Kevin Street, Dublin 8 This new Garda divisional headquarters, which features blocks of accommodation either side of an atrium, was designed by the OPW to respond to its historic surroundings; it is also energy efficient and sustainable.

Royal College of Surgeons in Ireland 26 York Street, Dublin 2 Completed late last year by Henry J Lyons, the college’s new home, just off St Stephen’s Green, is a state-of-the-art building. The subject of the RTÉ documentary The Big Build, it won the public-choice award at the RIAI Architecture Awards this year.

Twitter 1 Cumberland Place, Dublin 2 Originally built in the 1970s, Cumberland House has been completely refurbished – and in such a sustainable way that it is one of the few office buildings in Dublin to have Leed platinum certification. The project involved the complete strip-out of the building; all that remained were the existing concrete structure and brick facade.

Henrietta Street Tenement Museum 14 Henrietta Street, Dublin 1 Built in the 1740s as a town house for the elite of Dublin, 14 Henrietta Street was split into tenements in the 1880s and by 1911 was home to about 100 people. It remained a tenement house until the 1970s. The house is the primary artefact of a new museum showcasing the many stories of its former residents, restored and conserved by Shaffrey Architects.

Added since the map was printed

Death and Life of a Dublin Street Meet at 11am outside Centz, Dean Street, Dublin 8 An hour-long walking tour of Cork Street to Dolphin’s Barn, one of the city’s oldest radial routes, led by town planner Stephen Coyne.

10 Mill Street Dublin 8 Saturday, 11am-5pm One of the most significant 18th-century buildings in the Liberties

Ash Street A contemporary refurbishment of a private home by de Súin Architects.

Iveagh Trust Museum Flat The home of Nellie Molloy, a tenant who lived there from 1907 to 2002, preserved just as she left it.

The obvious and the overlooked: Dublin 2

City Assembly The first purpose-built public art gallery in Britain or Ireland, and possibly in Europe, recently restored by the Irish Georgian Society.

9/9a Aungier Street Visit the oldest, most intact house in the city, built in 1664 and concealed behind a 20th-century facade.

Something for everyone: Dublin 1

Reusing Dublin’s Past for a Housing-first Future An alternative walking tour of the north inner city with Space Engagers and the Peter McVerry Trust.

Merrion Mews An Irish Landmark Trust apartment (above a working Garda stables) off Merrion Square, accessed via a narrow staircase.

Custom House It’s on the map but won’t be open this year, unfortunately.

Dublin by Boat tour Cancelled because of weather warnings.

Paddle-boarding tour Grand Canal Dock from the Water, on Sunday, will be reviewed.