Larry Poons and John Gibbons: An unusual pairing that works

The master of American modern painting and sculptor have little in common, except spirit 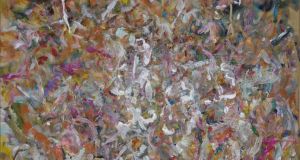 Hillsboro Fine Art, Dublin
Until July 6th, hillsborofineart.com
★★★★☆
Painter Larry Poons and sculptor John Gibbons are not an obvious pairing, and in truth their work is not at all similar: buoyantly coloured all over and purposeful looking, however unspecified the purpose, metallic objects, deftly and confidently made. Perhaps the connection is spirit or attitude (plus, they are friends). Though long based in London, Gibbons is a well-known, regular exhibitor in Ireland. Poons, born in Japan in 1937, has a long and distinguished career as an American painter to his credit but is probably a considerably less familiar name in Ireland.

He first studied musical composition in the 1950s and by his own account was so taken with Barnett Newman’s paintings when he saw them in 1959 that he decided to study art instead, though he did go on to play guitar in an experimental music group. And reportedly attendance at a lecture by composer John Cage encouraged his entry into what became known as systemic art. Devising certain rules and procedures, he made paintings in which expanses of saturated colour are embellished with regular grid-like patterns of coloured dots or ellipses, a compositional tactic that has been taken up by many artists since. Those paintings still look fresh and contemporary.

His approach became less formalised through the 1970s, as he began to use paint more freely, eventually building up surfaces with a variety of other materials. He came back to pure paint and has stayed with it. He is often, and to varying degrees, associated with Kenneth Noland, Frank Stella and Jules Olitski. Clyfford Still has been mentioned as an influence. But Poons, who was and remains a keen motorcyclist, actively resisted being categorised by Clement Greenberg as a post-painterly abstractionist and he was and remains more an individualist than a member of any school – as were most of his contemporaries, despite many critical efforts to band them together.

His work retains an excitement about the possibilities of painting. Conspicuous tonal and colour contrasts are a rarity in his work, and its characteristic, pervasive lightness derives partly from the way he uses not so much bright colours as so many colours that are very close in value to each other, in hue and tone. As a result it is almost impossible to take in his work at a glance. You have to linger with it and let your mind adjust. It is so worth the time.

The Invention of Memory: Curated by Julia Gelezova

Rathfarnham Castle, Dublin
Until May 30th, photoireland.org
★★★★☆
Although it is now whitish on the outside and pared back to a relatively basic structural form, Rathfarnham Castle is emphatically not a white cube exhibition space. Internally, it comes with considerable baggage of atmospheric, historical layers. The alterations and gaps and additions have been exposed rather than disguised during remedial works, so that the interior is a temporal patchwork. And all the better for it.

The Invention of Memory, a photographic exhibition curated by Julia Gelezova, is a good fit in this highly charged space. Its underlying idea is that the memory is never an objective recollection of myriad facts but a partial, selective and pointedly edited version of events. She cites the Borges character who could remember everything, which is, in a sense, nothing, as no meaning forms around a sheer, limitless miscellany.

In their work, the collaborative partnership of Benedetta Casagrande and Leonardo Falascone explore the invention of St Mary Magdalene. Maria Di Magdala stems from the medieval legend, which transports the penitent from the biblical lands to the French Camargue, usefully co-opting a region of southern Europe by means of speculative, even magical narrative, the promise of material relics and the inspiration of pilgrimage. Their fascinating project would surely find its ideal expression in the form of a book – and perhaps it will.

Lucie Khakhoutian’s source is her own multicultural background, encompassing Armenia and France. She treads a delicate line, mingling humour with an exploration of the more sacrosanct elements of identity, bound up with cherished mystical and spiritual values. That is, she does not diminish or denigrate the experiences or beliefs of the women in her family, her “cousins, aunts, grandmothers”, but she keeps sufficient distance to recognise the limitations of static, separatist ideas of identity, offering her own experience as evidence.

Clare Lyons shows a subtle body of work that makes up a haunting installation in a room of its own overlooking the parklands. The accompanying note says that she “explores themes of trauma, memory and her personal struggle with mental illness”. Her folded images have a sculptural quality; in fact they are a form of origami, beautifully made. The fragmentary images we glimpse have a dated appearance, as though they are old family snapshots, which indeed they might be. Their content is anodyne: snatches of backgrounds, pathways, garden gates, driveways, bland house-fronts, that sort of thing. But the folding mostly obscures and only slightly reveals, so we are left to speculate on what is hidden. This withholding is probably all the more effective when we have become accustomed to ubiquitous visibility.

Yvette Monahan’s Beyond the Ninth Wave is a series of lumen prints – that is images produced by arranging objects on light-sensitive photographic paper, usually organic in nature, and exposing them to sunlight. This work was specifically made for Matt Packer’s 2017 Tulca Festival in Galway, which took the controversial 1970s Atlantis commune in Donegal as its overall subject. Monahan collected sods of turf on the island where members of the commune practised primal scream therapy. The pieces of turf produce strange, ghostly oblongs. Arranged in a room where several layers of the castle’s inner skin are stripped back, the effect is all the more eerie.