Brush strokes with echoes of music 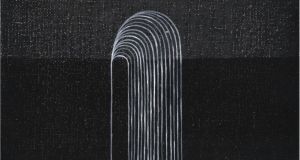 In discussing his work, Niall de Buitléar refers to drawing, which makes sense. Though he mostly uses paint, his rhythmic, linear compositions have the appearance of being drawn with a brush. He also refers to music, and that too makes sense. Specifically, he mentions David Byrne’s book, How Music Works. In the book, Byrne discusses his involvement with Brian Eno and Talking Heads. It’s no surprise to find that Eno was keen to explore a way of making music by building it from layers of textures rather than following conventional melodic song patterns. De Buitléar quotes Byrne on their aim to make music that is “multilayered and non-hierarchal; it has no centre or focal point".

He could well be talking about several kinds of minimal, ambient, dance and electronic music. De Buitléar’s paintings and sculptures start with a basic geometric motif, the circle. This circular unit reverberates through varieties of echoing, concentric patterns. On the one hand the patterning is absolutely strict, retaining its geometric basis. On the other, the works are made by hand, so that tiny fluctuations of touch, the fallibility of the human hand, is part of the overall character of the works. In fact, it’s essential to their character.

As with a Mondrian abstract, which can look soulless and mechanical in reproduction but springs to life when you see it in the flesh and realise that the calculation and making are dependent on the vagaries of instinct and touch, and there is an enlivening tension between the geometric and the organic. That quality links de Buitléar to Mondrian but there is no fundamental connection beyond it. Other artists come more readily to mind in relation to his densely patterned yet open-ended arrangements of line and form: Frank Stella’s black-and-white minimalist work, for example, and Bridget Reilly’s black-and white op art works from the 1960s (she has, incidentally, revisited this phase of her development in her most recent exhibition). Closer to home one might mention Charles Tyrrell, especially his graphic work. And, in musical terms, perhaps Philip Glass and Steve Reich even more than Eno and Byrne.

De Buitléar is clearly interested in the way simple units and algorithms can generate patterns of unforeseen complexity. There is something architectonic about much of what he does, most obviously the sculptural pieces, in which three-dimensional structures emerge from tightly limited systems of repetition and variation. Although pretty much everything in the Ashford Gallery is on a modest enough scale, there is an inbuilt monumentality to it. One can imagine it being restated in vastly enlarged form – huge architectural constructions – without missing a beat. The sculptural work, as well, has a more hard-edged, machined quality – literally, as apparently programmed laser cutting replaces the handmade.

While the paintings are nominally black-and-white, tonalities emerge and they have a lustre not unakin to honed dark stone, with that sense of concentrated physical presence. The surely slow, cumulative process also feeds into the overall effect, just as it does in the music that de Buitléar mentions: a certain calm evenness, but informed by an underlying, seething energy, like the hum of a motor.

A not-so-minor marvel of the cultural landscape in the Northwest, the Ballinglen Arts Foundation, celebrates its 25th birthday this year. Briefly put, the foundation was established by Margo Dolan and Peter Maxwell in 1992. The idea was that it offers fellowships, in effect working residencies, to Irish and international (many American, given that is where Dolan and Maxwell were based) artists, often accompanied by their families. It’s located in the village of Ballycastle on a physically imposing, visually spectacular stretch of the North Mayo coast.

Not surprisingly given the setting, most of the artists have had a particular interest in landscape. Sometimes, even if they didn’t, they acquired one under the influence of the immediate environment, which is epic and tough (Martin Gale once titled a show of work he’d made there Hardlands) but also extremely hospitable. Having set up the foundation in a small, relatively remote village, Dolan and Maxwell applied themselves, with dogged heroism, to putting Ballycastle on the map, artistically.

Gradually, something extraordinary happened. As artists visited and worked there, more and more of them fell under its spell. The community became increasingly involved in the working of the foundation, and artists became more and more a routine part of the community. The foundation became, in the very best sense, an ordinary part of the daily life in Ballycastle. Some visitors had never experienced rural Ireland – or perhaps Ireland, period – before, and it was a revelation.

The climate presented challenges and opportunities. Some, such as Stuart Shils, saw it as a challenge, and figuring out how to deal with it in paint set him off in a completely new direction in his work. By no means unique in being decisively influenced by Ballinglen, he is one of the artists represented in this exhibition drawn from the Ballinglen collection. Under the terms of the artists’ residencies, they are asked to donate a piece of work that they’ve made in Ballinglen. That’s over 600 works acquired over the past 25 years and, on the evidence of the show, it’s an exceptional collection.

In organising the exhibition, artist James Hanley and RHA Director Pat Murphy went through the collection and chose a representative range, focusing particularly on work that put Ballycastle and its surrounding centre stage. The quality and diversity are gratifying. More, to coincide with the exhibition, Ballinglen has announced a new project, The Museum of Contemporary Art @ Ballinglen, boasting exhibition and storage space and additional facilities from lectures, classes and other events.  A grant of €200,000 (50 per cent of the estimated cost) under the Rural Town & Village Regeneration Scheme has kick-started the project and building is due to commence imminently.

Johnny Logan: ‘Dickie Rock is a legend in his own head... He lives in a fantasy world’
4

The Billion Dollar Art Hunt: Searching for a Vermeer with Martin ‘The Viper’ Foley
9 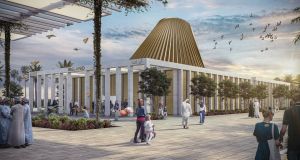