1950s Dublin: saving grand old houses from the politicians who hated them

How the Georgian Society stopped the demolition of derelict properties 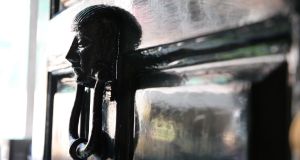 I The door knocker of the Headquarters of the Irish Georgian Society on South William Street. Photograph: Cyril Byrne/The Irish Times

It was a brief letter to The Irish Times from Desmond Guinness that got the ball rolling. Writing in July 1957, he lamented that the old Georgian Society “seems to have lapsed” and asked whether anyone would object to him “restarting” it, among other things to “fight for the preservation of what is left of Georgian architecture in Ireland”.

The younger son of Lord Moyne and an heir (one of many) to the Guinness brewing fortune, the Hon Desmond Guinness was living at that time in Carton House, former stately home of the dukes of Leinster, with his first wife Mariga – more formally known as Princess Marie Gabrielle von Urach Württemberg, from a high German aristocratic family.

The new society, founded in 1958, didn’t do itself any favours by having so many titled folk on it first committee, including Lord Talbot de Malahide, Sir Alfred Beit and Lady Dunsany. As I wrote in The Destruction of Dublin, “they were the remnants of the ascendancy seeking to preserve what was widely seen as the heritage of the ascendancy.”

Visceral antipathy to Dublin’s architectural legacy was summed up by a Government minister’s reaction to the demolition – by the Office of Public Works (OPW) – of two grand early 18th century houses at Kildare Place in 1957, one of them designed by Edward Lovett Pearce: “I was glad to see them go. They stood for everything I hate”, he said.

The Irish Georgian Society carried on regardless, conserving the Conolly Folly between Carton and Castletown House and saving the latter after Desmond had bought it and 120 acres of parkland, with the hands-on help of numerous enthusiastic volunteers in the early years. It is now in State care, through the OPW, rather ironically.

Damer House, in the courtyard of Roscrea Castle, was also saved from being demolished by North Tipperary County Council to make way for car parking – for tourists. Also thanks to the society’s fund-raising efforts both in Ireland and abroad, Doneraile Court in Co Cork was spared from becoming a ruin, as so many other great houses did.

But the biggest battles were fought in Dublin; over the ESB’s plans to demolish 16 late-Georgian houses on Fitzwilliam Street, the Green Property Company’s assault on Hume Street, and Matt Gallagher’s proposed destruction of the south side of Mountjoy Square; Mariga bought one of the threatened houses there, to little avail.

Desmond and Mariga split up acrimoniously, and this divided their friends into factions for a time; at one stage, she was living in a near-derelict courthouse in Glenarm, Co Antrim, before taking up residence – against Desmond’s wishes – in Leixlip Castle, Co Kildare. After her untimely death in 1989, she was interred under the Conolly Folly.

This was an inspired choice by Mariga’s friend Desmond FitzGerald, the 29th and last Knight of Glin, who succeeded her former husband as president of the Irish Georgian Society in 1990. He wore two hats, one as a champion of our architectural heritage and the other as Christie’s representative in Ireland, organising big house auctions.

A lavishly illustrated book, The Irish Georgian Society: A Celebration by Robert O’Byrne, marked its 50th anniversary, detailing all the “fights and fun” members had over the years as well as the worthy restoration projects it helped to fund, with the aid of significant bequests, including one from Andy Warhol’s business manager Fred Hughes.

Its biggest project in recent years has been the ongoing restoration of the City Assembly House (formerly the Dublin Civic Museum) on South William Street, now the society’s headquarters under executive director Donough Cahill, while barrister and former member of An Bord Pleanála Michael Wall has succeeded Patrick Guinness (Desmond’s son) as president.

I should also declare an interest: for many years, I’ve been a member of the Irish Georgian Society’s Conservation Awards jury, enjoying tours of historic properties all over Ireland, organised by Marion Cashman and the late, much-missed, Mary Bryan. Nearly everywhere we went, we saw inspirational restoration projects, even involving glasshouses.

That’s been the most significant change over the past 60 years. Having started out resenting Georgian buildings as relics of “the 800 years of oppression”, we have grown to accept, even to love them. And this dramatic shift in public sentiment must be attributed, at least in part, to the valiant work done by members of the Irish Georgian Society.

To celebrate its 60th anniversary, the society will be holding an inaugural show, Exhibiting Art in Georgian Ireland, this summer in the newly-restored octagonal space at the rear of its headquarters, which has been named the Knight of Glin Exhibition Room. Membership is €60 per year (€15 for students). Contact info@igs.ie to join.

Real croissants: How to make stunning French pastries at home