Art and culture thrive in spaces of disagreement

Storms or otherwise, every other Capital of Culture has been beset by problems 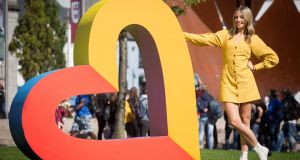 If you agree with Plato that a good start is half the battle, you’d be worried for Galway 2020. Quoted in different ways since 400BC, the Greek philosopher was voicing the generally agreed principle that if you don’t get off to a satisfactory beginning, you’re halfway to being screwed.

It wasn’t the Capital of Culture organising team’s fault that Storm Ciara caused the cancellation of their centrepiece opening ceremony last weekend, though this week’s decision by Galway City and County Council not to grant an additional €2.5million in funding doesn’t quite fall under the act of God category.

Private sector money hasn’t materialised to anticipated degrees, artists feel marginalised, and stakeholders are at odds over the vision and the payback. In that, the Galway team are in good company. Every other Capital of Culture since the dawn of time (or at least since 1985, when the initiative began), has been beset by problems, resignations and general mutterings. Of seven cities to hold the title between 2008 and 2010, only one retained its director for the duration.

One issue is that we don’t all share an understanding of what culture is. For some it’s traditional ways of living as a group of people or tribe. For others it’s sport; horse racing has its own culture after all. For some it’s high art, elitist even. Alternatively it’s food, or then again anything from street art to the shared experiences of musical theatre, feelgood films and amateur dramatics.

Shared experience is a defining part of culture, but we don’t even have a shared set of understandings as to what good art is, or who it’s for. So it’s a tall order to expect funders, private enterprise, local authorities, artists (of all persuasions), participants and audiences to agree on what might mark out a good Capital of Culture programme.

Another problem is risk. You don’t get great life-changing or boundary-shifting works of art without taking a risk, and the greater the project, the bigger the risk. On the organisational scale, that can lead to opening night hiccups: when half a million people turned out to enjoy the kick off for Antwerp 1993, they discovered that the fireworks had been badly set, and mainly went off horizontally instead of shooting into the sky.

My dad, a scientist, believes in risk. He has always said that if 90 per cent of your experiments aren’t a failure, you’re doing the wrong experiments. He obviously isn’t thinking of horizontal fireworks, but it’s an interesting way of looking at art in our success-obsessed culture, in which failure is unforgiveable: both from an audience loyalty, and a funding perspective.

So with that in mind, here’s a short list of some notably difficult beginnings in cultural history:

Just last summer, the opening night performance of Rough Magic’s open air Midsummer Night’s Dream at the Kilkenny Arts Festival had to be halted before the second act for fear of a thunderstorm. The play went on to a successful run, critical acclaim and a nationwide tour. Storms, as we have seen, force the cancellation of events, and parades are frequently washouts, but iffy starts also stem from cultural causes.

Culture and good art are different things to different people, but, organisational issues aside, risk is what makes glory possible

The Playboy of the Western World: John Millington Synge’s drama famously sparked riots at The Abbey when it premiered in 1907. Sinn Féin’s Arthur Griffith described it as “a vile and inhuman story told in the foulest language we have ever listened to from a public platform.”

Audience catcalls were so loud when Puccini’s Madame Butterfly premiered at La Scala in 1904, that the singers couldn’t hear the orchestra. Puccini himself described the opening night as a “lynching” and embarked on a set of rewrites.

When Edward Elgar’s Cello Concerto was first performed in 1919, the composer was anxious about a lack of rehearsal time, and wondered about pulling the performance. The critics called it “lamentable”, and audiences were no keener. It is now one of the best-loved pieces for the cello.

The Evening Standard’s critic called John Osborne’s Look Back in Anger “self-pitying drivel” when it opened at the Royal Court in 1956. Many thought the English Stage Company would fold as a result. It is now seen as a classic of 20th century political theatre.

The Capital of Culture project is inherently troublesome, and the team at Galway will never please everyone. Culture, and good art, as we have seen, are different things to different people, but, organisational issues aside, risk is what makes glory possible, and art and culture thrive in spaces of disagreement. At their best they open the windows to fresh perspectives and previously unimaginable ways of thinking. They also allow us to disagree in a positive way. These are prizes worth fighting for, just don’t expect consensus on the way.