Are humans losing the ability to be idle?

Unthinkable: A new book on dossing and daydreaming seeks to challenge our traditional work ethic 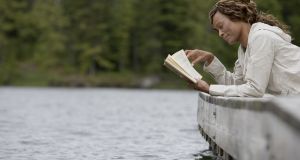 Even when relaxing, people feel an urge to read something ‘improving’ or useful. Photograph: Noel Hendrickson/Thinkstock/Getty

Christmas is promoted as a time of rest and idleness but for many of us it’s just another opportunity for work. There are events to organise, presents to buy and, should you at some stage find time to curl up with a book, you’ll probably have an urge to read something “improving” or useful.

Pure inactivity or laziness is shunned, even at this traditional time of peace. Why? Because we’re so conditioned to be “busy, busy, busy”, and to believe – as Erich Fromm put it – “man is alive only inasmuch as he is productive”.

UCD philosopher Brian O’Connor believes it’s time to reclaim the virtues of dossing and daydreaming. In the tradition of Robert Louis Stevenson, he has written a treatise against the work ethic, Idleness: A Philosophical Essay (Princeton), in which he questions whether “the type of people required by modern societies” – highly productive, “always-on”, constantly striving, etc – are truly free.

In civilizations like ours the thought of wasting one’s life has the ring of horror to it.

O’Connor, today’s Unthinkable guest, suggests that idle aimlessness may allow for “the highest form of freedom” but appreciating this “implausible-sounding scenario” means rethinking some of our core values.

Is work an aid or an obstacle to freedom?

Brian O’Connor: “Various thinkers over the past few hundred years have put forward the idea that work ought to be a thrilling experience in which we use our talents, contribute in some way to the common good, and bask in the recognition we get from others.

“That might be close to some people’s idea of freedom but there’s something odd about it. That experience depends on our willingness to exert ourselves in the name of our talents, to make ourselves useful, and to need the good opinion of others. That’s not quite so easy a view of freedom to defend.”

The Biblical injunction not to waste your abilities is deeply ingrained in the western psyche. To what extent does Christianity still influence how we think about work?

“Max Weber has given us a treatise on the ‘Protestant work ethic’ that has been enormously influential as an interpretation of how we in the west have come to think positively about the virtues of work. Work may be valued for distinctively other reasons in other places. There is, though, a remarkable tension in what I might boldly call the overall Christian view of work.

“Genesis offers us the most beguiling images of freedom, bliss, and idleness. It appears, though, that expulsion from Eden is a punishment for disobedience. Work comes into existence only because of that mythic expulsion.

“If Weber is right about the role of a particular kind of Christianity in justifying and ennobling work in the age of capitalism, then we can see here an irony of the greatest imaginable significance. The punishment handed out to Adam – that he must toil with the sweat of his brow – is transformed from within Christian thinking itself into an opportunity for advancement and admirable wealth.”

In defence of industriousness, might one argue that being busy is a way of making the most of life, while idleness has connotations of wasting time?

“I think what your question pivots on is the notion of ‘waste’. In civilizations like ours the thought of wasting one’s life has the ring of horror to it.

“The ‘wastrel’ did little with the years allotted to her or to him, lived and died in obscurity, contributed nothing, and was indifferent to conventional ideas of ‘a life worth living’ - as one of our local industrialists [Michael Smurfit] proudly titled his autobiography... Supposing, though, the wastrel was happy?

“Turning again to the history of ideas, we can find philosophers as majestic as Kant and Hegel generating complex arguments to bring the happiness of the idler into disrepute. They try to persuade us that it is unworthy of people socialized in the developed world to place the happiness that comes with idleness over the non-guaranteed satisfaction that comes from hard work. They need to convince us that using our time ‘usefully’ is more important than idle happiness. I think their arguments are philosophically unsuccessful.”

Are some forms of idleness better than others? For example, those bound up with developing friendships, “broadening one’s mind”, or getting closer to nature?

“That actually brings into focus two different views of idleness. There’s a respectable notion of idleness along the lines of what you’re suggesting. It holds that idleness consists in the freedom to do what is truly valuable. This implies that there’s some implicit agreement about what is really best for us and what is most deeply human. I’m sure I share many of those basic beliefs. At the same time, there is something potentially contradictory about an idleness that demands high levels of activity.

“We could end up recommending that we divest our energies from the world of work and direct them to ‘culture’ or fully immersive trips to the countryside. From the point of view of our kind of society, that’s certainly better than the idleness of the wastrel. But it’s a domesticated type of idleness, it seems to me. It’s pretty much the sort of thing we want to do when we have some time off work. It’s enriching and restorative.

“The world of work accommodates, and indeed needs, happily restored employees. That’s why the disreputable version of idleness is the more challenging one.”

Speaking of time off work, many people feel a need to use their holidays productively. What’s the best way of spending one’s spare time?

“I’m sure we should spend our spare time as we see fit. I have no advice to offer. It’s interesting, indeed, that some people think of holidays as time to be embraced with vigour. Could it be that the trained habit of industriousness is carried on outside the workplace? There’s a felt need to be doing something big.

“There’s evidence, in fact, that a small but notable percentage of workers across the west have come to prefer work to holiday time. Perhaps this is not very surprising.

“The conflict you mention in your question is evidently too much for some: they don’t know what to do with time that is now their own. They have a skill set that has evolved and adapted to suit the structure and familiar tasks of the workplace. What they don’t have is a capacity for leisure – which is a kind of skill – never mind for idleness. They report boredom during their free time and may, as a consequence, under-claim their annual leave entitlements.

“It’s hard to disentangle all these issues or to say what it all means. We might, though, be in promising territory with the idea that the freedom we associate with carefree idleness has been largely trained out of us.”