What can the West learn from the rest? 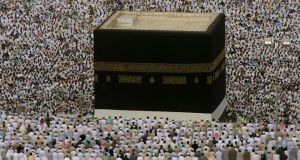 Muslim praying in Mecca, Saudi Arabia. Islam has ‘given rise to remarkably free societies as well as depressingly intolerant ones’. Photograph: AP/Muhammed Muheisen

Sometimes we forget just how weird we are – we who are part of the western, educated, industrialised, rich, and democratic (weird) world.

More than three-quarters of the global population lives in Asia and Africa, and over 70 per cent of humanity exists on $10 (€9) or less per day. There is a world, not just outside our social media echo chambers but, beyond the traditional limits of national, European and western discourse.

Philosopher and author Julian Baggini is keen to remind us of this in his latest book: How the World Thinks: A Global History of Philosophy (Granta). While globalisation has led to the increased flow of goods and people, there has been little in the way of ideas transiting across borders.

“It is a damning indictment of the shallowness of globalisation to date that we are much more versed in the world’s cuisines than we are with its philosophies. People are more familiar with an Indian korma than they are with the true meaning of karma,” he says.

In many parts of the world, the idea that we treat everyone the same would seem absurd.

Arguing that “the borrowing of foreign ideas can deepen and expand our thinking” Baggini cites the example of “ubuntu”, the southern African concept of communal interdependence.

Ubuntu “is very challenging for the western mindset, which sees rights and the rule of law as sacrosanct. But ubuntu has a lot to teach us”.

“First of all, it explains why the bending of the rules so often seen in Africa is not always simply corruption. It is at least sometimes rooted in commitment to a deep moral principle that we should not allow the inflexibility of rules to get in the way of a just and peaceful solution to a problem.

“Second, a feature of cultures that value ubuntu is that important decisions are ideally reached by consensus . . . Democracy itself requires something of the spirit of ubuntu or else it ends up as a winner-takes-all contest where the majority tramples over the preferences of the minority.”

You say one advantage of having a more global perspective on philosophy is that “it makes us see what is unusual in what we too often take for granted”. Can you give an example?

Baggini replies: “Take the value of impartiality, captured in Jeremy Bentham’s dictum ‘everybody to count for one, nobody for more than one’. It might seem obvious to us that morality depends on this. But in many parts of the world, the idea that we treat everyone the same would seem absurd.

“In Confucianism, the moral responsibilities of fathers and sons, husbands and wives, rulers and ruled all differ. Leading scholar of Chinese philosophy Roger Ames describes Confucianism as a form of ‘role ethics’ because it says that your obligations differ depending on your role in society. Most societies take this broad approach.

“When comparing different global philosophies, it is as important not to overstate the differences as it is to notice them. You rarely find an idea in one culture that is completely alien in another. The difference is usually one of emphasis. As the Japan specialist Tom Kasulis puts it, ‘What is foreground in one culture may be background in another.’

“Seeing how Confucian ethics foregrounds role ethics makes us both notice how exceptional our commitment to impartiality is while also reminding us that it is not as clear-cut as it might seem. In practice, people do believe they should treat their family differently to strangers. Many also see their obligations to fellow citizens as greater than those to people from other nations.

“It could even be argued that recent political battles over immigration have emerged precisely because many governments forgot this and tried to create a system based on idealised universal values which was more impartial than ordinary people were prepared to accept.”

Is there a right way and a wrong way of approaching other belief systems?

“If we are to have a globalisation of ideas, we must avoid the greatest mistake of globalisation to date. A more interconnected world should have been one in which there is more diversity, in which different nations and cultures are treated as equals.

“The free movement of ideas should be a force for diversity, not hegemony. In practice, globalisation has too often been a process of the world becoming more westernised, with McDonalds in Red Square, Starbucks on the Champs-Élysées and Coca-Cola almost everywhere. What little globalisation there has been in ideas has tended to follow this pattern. Western ideas are more studied in the universities of India, China and Japan than Asian ideas are studied in Europe and North America.”

But is difference of opinion really so great? Isn’t there a risk that by celebrating diversity for its own sake you’re contributing to a creeping relativism?

“I certainly don’t celebrate diversity for its own sake. You have to distinguish pluralism from relativism. Relativism tends towards ‘anything goes’ and that can’t be right.

“Pluralism is the view that although some ways of living really are wrong, the list of possible good ways to live a flourishing human life and have a good society contains more than one item.

“My book is very much in the pluralist, not the relativist spirit. That’s why although I try to be as open-minded as possible I am not afraid to criticise some ideas in different traditions, including our own. I find it interesting that many people do not maintain this symmetry of scepticism. They either dismiss other cultures and defend their own or believe we should never criticise other cultures while being very quick to critique their own.”

Debates between different faiths and philosophical traditions can be ugly at times. If you think someone’s beliefs are daft, evil or unjustifiable should you challenge them directly, or seek to convert them?

“It very much depends on how harmful those wrong beliefs are. If someone believes Elvis is alive on the moon, attempts at dissuasion can be gentle. If someone believes it is okay to behead people who they define as infidels, argument might be impossible and we might even have to resort to violence.

“In general though, we don’t stand much chance of changing people’s minds if we don’t properly understand what they believe and why. Dismissing them as crazy or stupid is a good way of making sure that they dismiss you as ignorant and prejudiced.

“Often, trying to change people’s minds 180 degrees is an unwise strategy anyway. To live together we don’t have to agree on everything, just enough to enable us to rub along happily.

“When we look at other traditions we often find that they contain within them resources for extremism and also for openness. This is evident in Islam, which has in its history given rise to remarkably free societies as well as depressingly intolerant ones. Our best hope to avoid the ‘clash of civilisations’ is not for the Islamic world to either lose its religion or have a European-style enlightenment but for it to recover its own traditions of plurality and tolerance.”