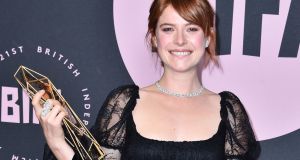 In a very successful night for Irish film talent at the British Independent Film Awards, the Element Pictures-produced The Favourite won 10 awards, and Irish actor Jessie Buckley won Most Promising Newcomer for the lead role in Beast.

At the British Independent Film Awards (Bifa) ceremony last night in London, Olivia Colman won best actress. She led the cast in the story of Queen Anne and the internal politics of her court and coterie of female favourites. Co-star Rachel Weisz was named best supporting actress for her role as the queen’s favourite. Colman said the cast are now “friends for life” after she, Weisz and Emma Stone bonded on the set of the period comedy-drama.

She added: “If you love what you do and other people love it, you couldn’t be more proud. This is almost too good, too nice.”

Element Pictures, run by Ed Guiney and Andrew Lowe, has offices in Dublin and London, and works in film production, distribution, and exhibition. Producer Ed Guiney said “I’m thrilled for all involved in The Favourite, we had a wonderful cast and crew who worked on this film, led by visionary director Yorgos Lanthimos, and we’re all hugely grateful to Bifa for this massive recognition.”

Irish actor Jessie Buckley won most promising newcomer at the Bifas for her role in the psychological thriller Beast; she was also nominated for best actress for the role. In the film Buckley plays a troubled woman living in an isolated community, who finds herself pulled between the control of her oppressive family and the allure of a secretive outsider suspected of a series of brutal murders.

Speaking after the ceremony she said darkness, depression and other tough themes are part of an actor’s job. “I’m pretty buzzing. We all have darkness in us. I think people want to see all the colours of the canvas. As an actor it’s your job to show that.”

The Killarney-born singer and actor first came to international notice when she came second in the 2008 BBC talent show I’d Do Anything, the search for a new, unknown lead to play Nancy in a London West End stage revival of the musical Oliver!. She later played Anne Egermann in the West End revival of Stephen Sondheim’s A Little Night Music and graduated from the Royal Academy of Dramatic Art in January 2013.

Recently, Buckley was in four BBC television series: as Marya Bolkonskaya in BBC’s adaptation of War and Peace, as Lorna Bow in Taboo, as Honor Martin in The Last Post, and as Marian Halcombe in The Woman in White.

When she was nominated this year, Hollywood Reporter profiled her as one of five rising names nominated in Bifas, “whose first feature lead roles have marked them out as potentially major future stars”. It said “ Buckley’s star turn as a Scottish country singer in Toronto 2018 hit Wild Rose” earned her “further adulation and major upcoming projects including the likes of Judy, alongside Renee Zellweger, Ironbark, alongside Benedict Cumberbatch, Misbehaviour, alongside Keira Knightley and The Voyage of Doctor Doolittle, alongside half of Hollywood.”

In the Bifas this weekend, best supporting actor went to Alessandro Nivola for his role in another Element Pictures’ film, Sebastián Lelio’s Disobedience, a religious and romantic drama also starring Rachel McAdams and Rachel Weisz (it was nominated in several categories). Nivola played a north London Orthodox Jewish man.

The Irish production company Element Pictures led the field in nominations with The Favourite earning a total of 13 nominations, and its other new title Disobedience up for five awards.

Meanwhile Palas cinema in Galway city, which is run by Element, was this weekend awarded the Best Use of Colour Prize in Amsterdam at the World Architecture Awards.

Scannain, which represents Irish independent film, tweeted the news last night, commenting: “So that’s one hell of a night for Irish films and Irish talent at the @BIFA_film awards.”

Screen Ireland chief executive James Hickey said today: “This is an extraordinary achievement”, and congratulated Ed Guiney, Andrew Lowe and all the team at Element.

“We are proud to have supported Element down through the years on major Irish films such as Room, The Lobster and The Guard, and we are delighted to see an Irish production company considered among the best in the world. We have high hopes for further international recognition for Element Pictures, as awards season progresses.

“We are also particularly proud of Irish cinematographer Robbie Ryan who has built a very strong slate of work over the last number of years and is very deserving of this honour.”

The Favourite took home 10 awards from the British Independent Film Awards in London. Here is the full list of winners from the ceremony at Old Billingsgate market:

The Sound and the Fury by William Faulkner: American Ulysses
10