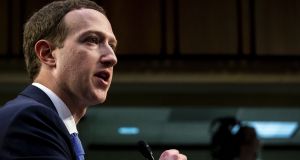 Hours of US congressional testimony by Facebook founder, chief executive and chairman Mark Zuckerberg this week gave little satisfaction that anything has changed at a company whose founder has, for 14 years, been a serial apologist for privacy mishaps.

Repetitive and gruellingly long, the testimony produced a sometimes fascinating, often frustrating mixture of mistruths and half truths, evasion, and occasional surprise revelations.

Zuckerberg had clearly been through extensive preparatory media training, and many responses for predictable questions featured well-rehearsed, go-to replies and phrases, though the unexpected – such as Illinois senator Dick Durbin asking would he reveal where he had slept the previous night – visibly rattled Zuckerberg and the corporate minders around him.

Some media coach must have suggested Zuckerberg try to disarm queries by regularly reminding senators of Facebook’s quintessential American tech success story, from dorm room to riches. Listeners were ushered back to that dorm room by Zuckerberg so many times that you could nearly smell the dirty socks and stale takeaway pizza boxes.

Then there was Zuck’s disconcertingly frequent reply that artificial intelligence would Save Us All. Fake accounts? Russian manipulation? Online nasties? All would soon be solved by Facebook AI – well, maybe in five or 10 years.

Shame about the interval before then, but, as he reminded us yet again, Zuckerberg didn’t feel he could have done much better to minimise some of today’s problems because he didn’t have access to AI when he founded Facebook. In his dorm room.

Any time questions grew uncomfortably probing or specific, he fell back on a handy call to allow his “team” to get back to the committees later.

Then there was the easy evasiveness of just not answering what a questioner clearly meant but didn’t have the technical or Facebook terminology, or knowledge of recent changes to labyrinthine user agreements, to ask.

Instead, easy to say – repeatedly – that, for example, Facebook doesn’t collect and sell data to others. But Facebook has done this, and continues to do this, either in fact or by any other name.

Facebook might not gather your data like a broker and sell it, but until only two weeks ago it still partnered with data brokers. And it ended eight years of allowing third-party developers access friends’ data without their knowledge or consent only in 2015.

One of Zuckerberg’s most egregious claims on Tuesday was that this actually was “consent”, even though you never knew your friends gave away access to your data, Facebook never told you, and in places such as the European Union it definitely Was. Not. Consent.

Plus, developers still get access to your Facebook data when you sign up for their Facebook apps. Which is, surely, selling your data by another name, as is Facebook’s core business model of using your data internally to enable advertisers to target you.

Questioned as to why the company had failed to notify users, the Federal Trade Commission or any other body after learning of the Cambridge Analytica data breach in 2015, Zuckerberg claimed that the company had considered it a “closed case”. But California and many other states mandate disclosure of such breaches to individuals. Watch that particular space.

This murky answer also evades the more critical point that Facebook is now so vast, so monolithic that it doesn’t need data brokers or developers to monetise you. Just look at its secretive quest to incorporate personal health data.

What can we conclude from the hearings?

The markets surely misjudged, with Facebook shares rising on Tuesday. And tech commentators are blinkered when they complain that Congress was mostly too old and tech-illiterate to ask the necessary questions or understand replies.

Who, anywhere, understands what that company – or so many others – is really doing?

What baffles and confuses US senators baffles us all. Legislators don’t need to understand shadow data brokering or ad revenue to know at gut level that something is very wrong. Solutions shouldn’t be specific to Facebook’s internal structures and operations either.

Strong general privacy regulation, giving users real ownership of their data, would address many of the problems here.

Tellingly, business-friendly republicans asked some of the toughest questions about privacy, disclosure and regulation. And consider post-hearing coverage from the Washington Post live stream, whose reporter spoke to nearly half the committee senators as they exited Tuesday.

He said two clear trends emerged from senators’ comments. They felt Facebook was a media company more than a tech firm, and they were unhappy with Zuckerberg’s replies and therefore supported regulation.

That will alarm Facebook and other data-gathering tech giants. Media companies are held to a much higher standard than a “neutral platform”, as Facebook sees itself. And threats of stronger regulation will further chill the already cold hearts of many Silicon Valley companies.